5 Prescott trails that will make you a white-dot follower

Imagine a rolling sea, with nothing but waves as far as the eye can see. Instead of churning water, though, these waves are made of solid rock. And rather than blues and greens, the waves are in hues of reds and browns.

That is what you’ll find when you venture into the Granite Dells trails in Prescott, Arizona. But rest assured that you won’t be climbing aboard without a compass: A series of white dots and maps will steer you through. 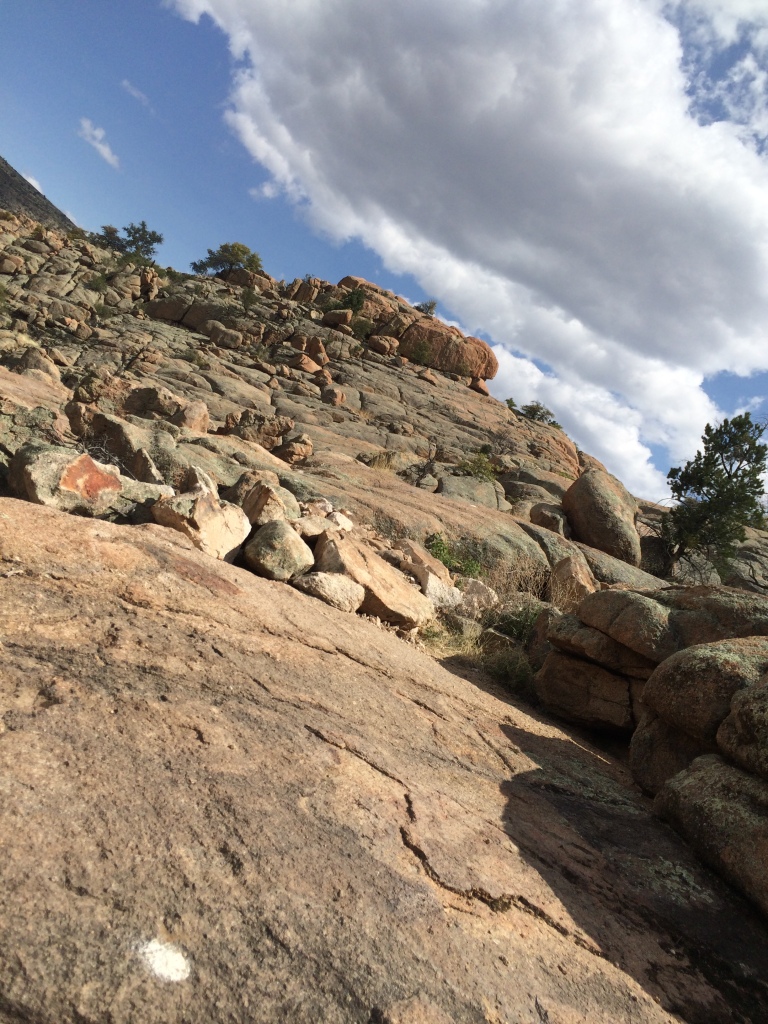 For more than a decade, Prescott’s Parks and Recreation Department and a group of intrepid volunteers have been building trails through the Dells. Because many of the routes take hikers and mountain bikers over sheer rock faces, the trails are marked with white dots to point the way.

For me, the opportunity to feel like a rock climber (sort of!) without the risk, or need for technical skills, is pure fun. I have my favorites among Prescott’s “white-dot trails.” Here are five of the best:

Snaking up the steep red-granite ridge that lines Arizona Highway 89 in northeast Prescott, the Constellation Trail is a hiker’s dream.

As it climbs to the summit, the trail passes massive rock shoulders that give way to stands of leafy shrubs and trees. While real rock climbers can sometimes be seen scaling the huge boulders along the way, the trail is also a magnet for families looking for a fun excursion in the evening or on the weekends, or for joggers and mountain bikers out for a quick workout.

If you stick to the main trail, the loop is only about two miles, although there are options for side routes available. Collectively, the trail system consists of about 3.4 miles.

The area is undeniably beautiful, but it has a tragic history. Those who take the time to read the plaque at the trailhead will learn that five U.S. Navy Servicemen died at the site in February 1959, when their C-121G Super Constellation airplane crashed into the rocky terrain. The city dedicated the trails to the servicemen, and named the trail after their Constellation aircraft.

Another trail with a history, the Flume Trail, harkens back to the days of the historic Granite Dells Resort swimming lake, which used a system of “flumes” or water pipes to transport water from the nearby Granite Creek.

The Flume Trail connects with the Watson Dam Trail, which begins at a trailhead on Granite Dells Road – not far from the ruins of old swimming lake, which has been defunct for years. The trails take hikers along a pretty stretch of Granite Creek, below the Watson Lake dam. Depending on the seasonal precipitation, the creek can be barely a trickle, or it can be roaring through the canyon.

A major perk of the Flume Trail: It takes you right to the base of the dam, where you can look up and often see water cascading over the spillway and into the creek below.

The Flume is a relatively short trail, but it includes a few steep climbs through and over rock formations. Connecting with the Watson Dam Trail and the Northshore Trail, it leads to the longer Watson Lake Loop Trail.

Branching off of Prescott’s popular Peavine Trail, the Lakeshore offers relatively quick access to the gorgeous convergence of orange granite and blue water. As its name implies, the trail dips again and again into the coves that line the Highway 89-area Watson Lake.

Even though the Lakeshore runs roughly parallel in places with the busy Peavine Trail, it can feel like the middle of nowhere in a hurry, as it cuts through  remote canyons. Signposts with maps that show your current location should help keep you on the right path, though. 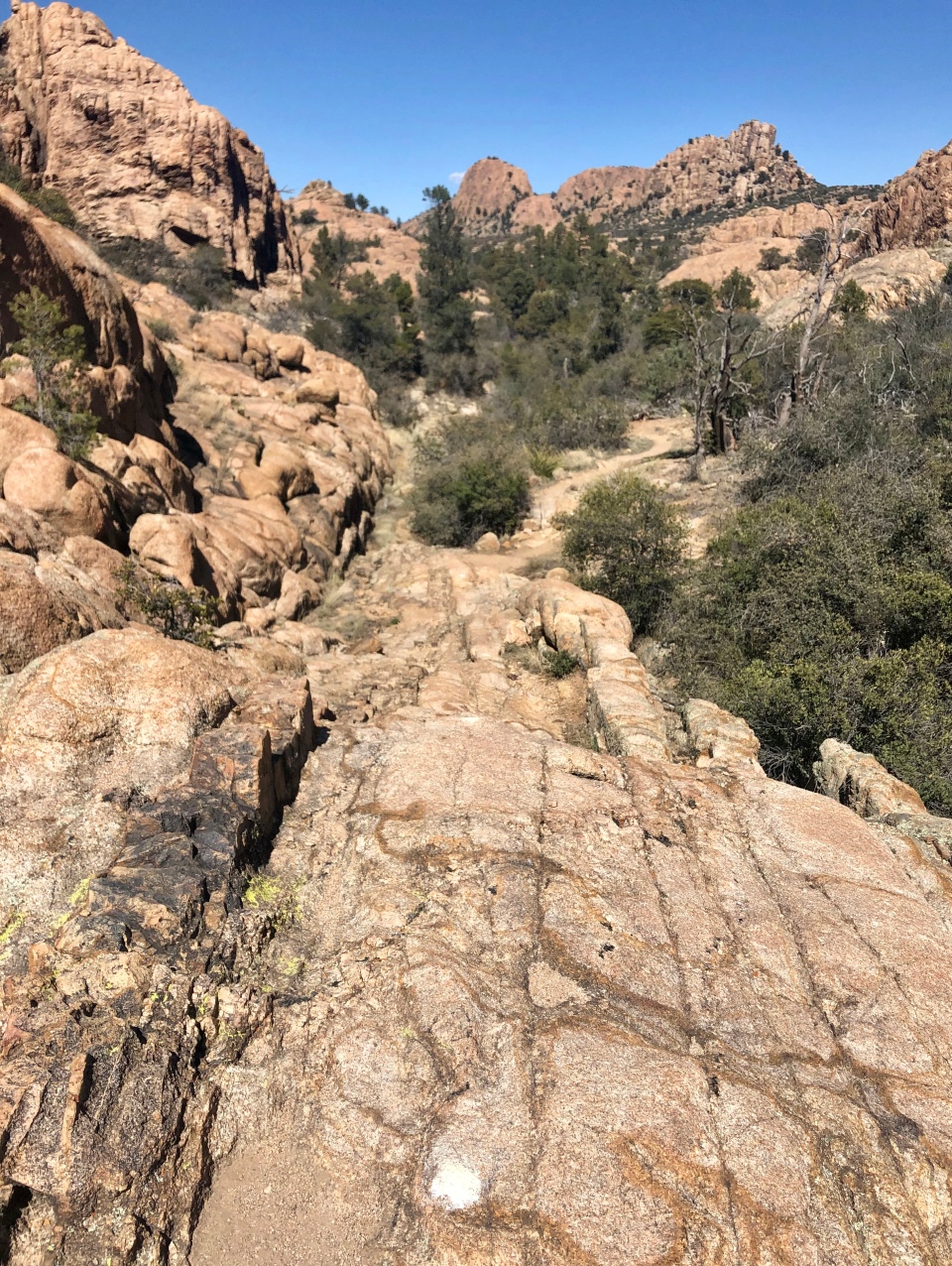 Another bonus of the Lakeshore Trail is its access to the Secret Cove – a lovely area where water cascades over an old abandoned dam during the wet season.

It is a relatively small waterfall, but it’s worth the short detour of less than a half-mile off the Peavine Trail (keeping to the left) just for the rush of running water deep in the Granite Dells. 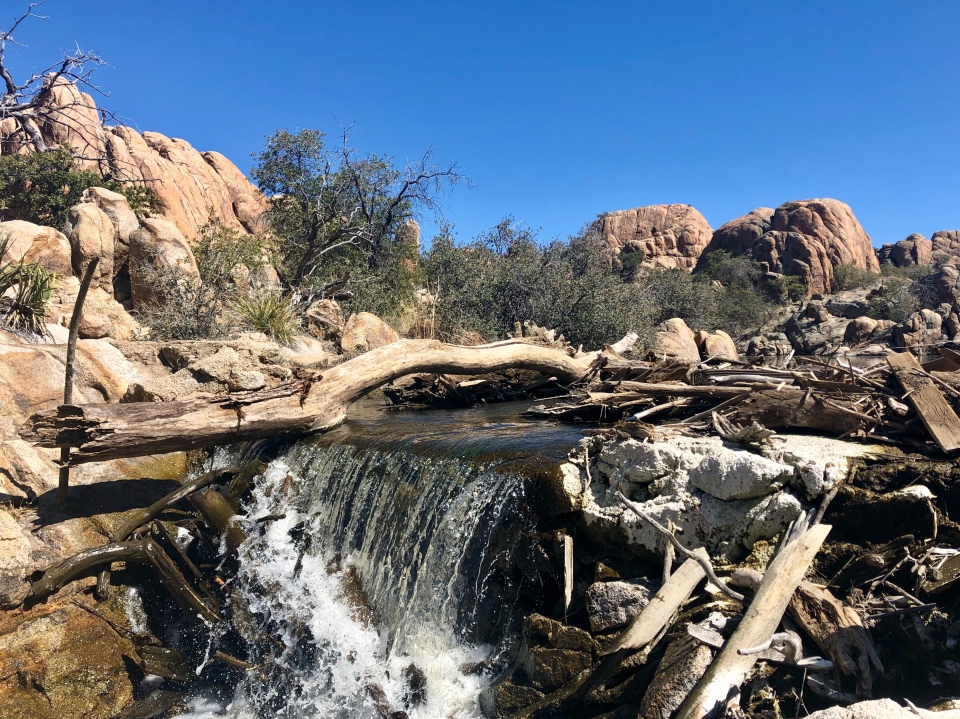 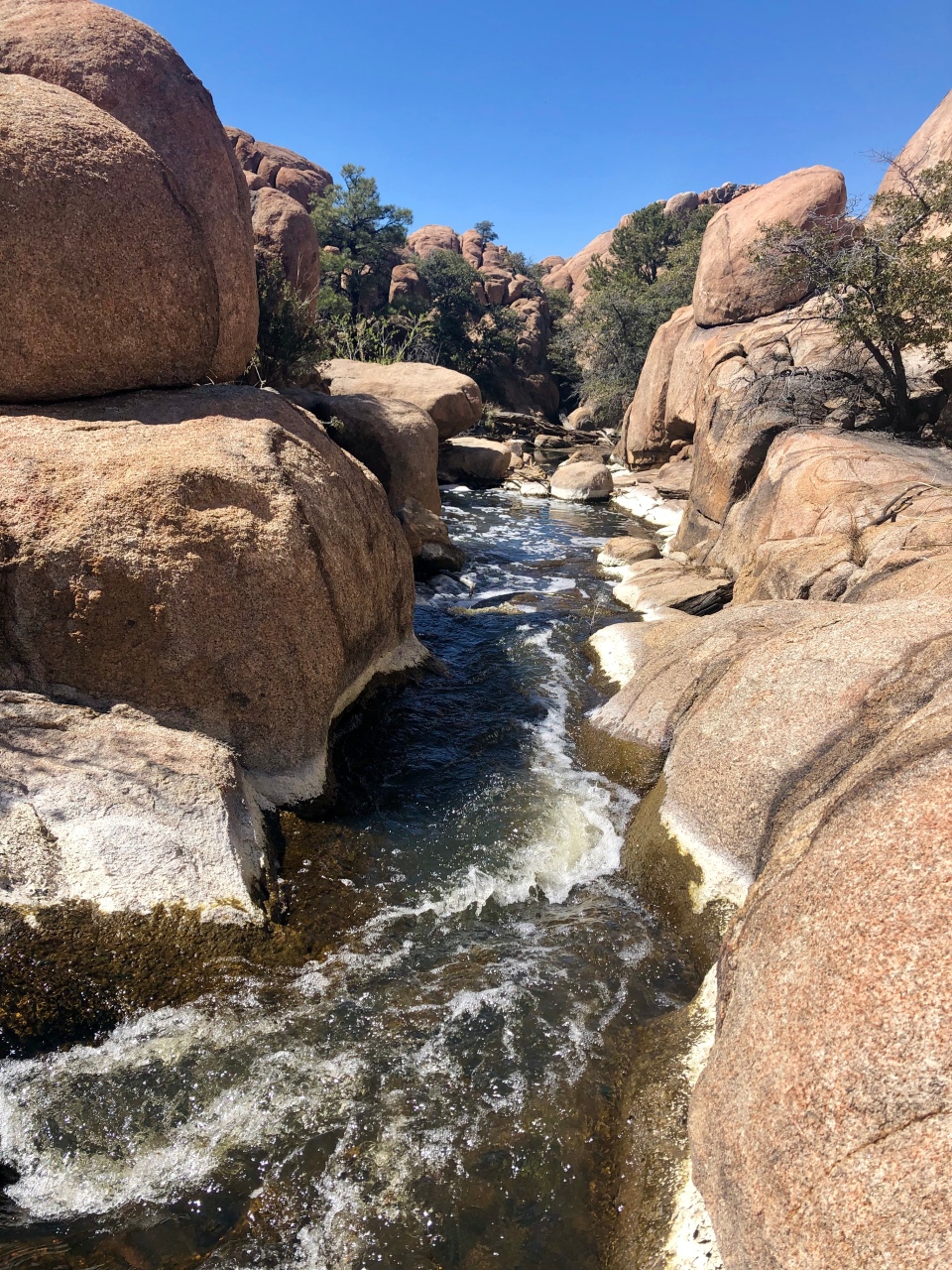 It’s hard to pick a favorite among the labyrinth of trails at Willow Lake, but the Shoreline Trail combines great views with several good climbs over slabs of granite – pure magic!

The Shoreline Trail also connects to other stellar Dells trails such as the Apex, a steep climb over undulating rocky terrain to a summit offering a stunning vantage point, and the Red Bridge Loop, which includes expansive views of the lake and the nearby neighborhoods of Prescott. 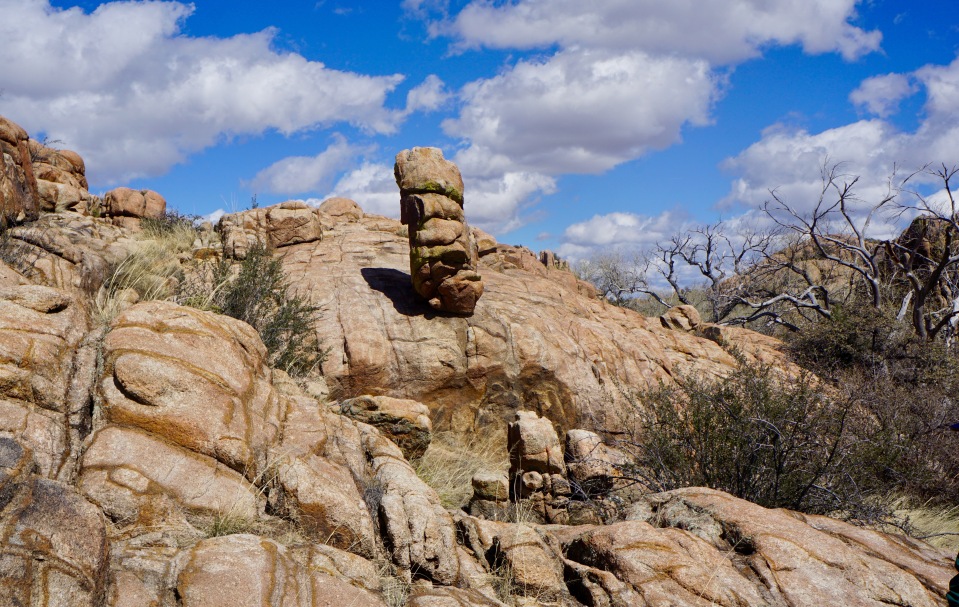 It also takes hikers to the base of the Willow Lake (Willow Creek) dam. The shallow lake doesn’t overflow often, but when it does, it’s a sight to see!

Plenty of unique features distinguish the Granite Gardens Trails from Prescott’s other white-dot trails. A steep stairway, a “grotto,” and plenty of interesting-looking rock formations make the area located just off Highway 89 on East Granite Gardens Drive a must-see.

Access to the trailhead is not the greatest, but the gorgeous views more than make up for the rough, sometimes-flooded road into the trailhead. Castle Rock dominates the area, with its dome-like shape.

My favorite area is the Rock Stacker Trail, which passes by some of the most interesting granite shapes around. The trail system also includes the slightly spooky Grotto trail, which takes hikers through a cave-like area. The white dots don’t lie: You might hesitate at entering the cave, but rest-assured that you’ll make it through to the other side.

With more than 100 miles of trails in its Mile-High Trail System, Prescott has plenty of other hiking/biking/horseback-riding options as well – over Granite, through forests, and around lakes.

These five options are just enough to whet any hiker’s appetite.

Prescott is located about an hour and a half from Phoenix and is virtually surrounded by the Prescott National Forest, where miles more of trails can be found among the towering ponderosa pines.

At just over 40,000 population, Prescott is large enough to have plenty of fun opportunities (think: the bars and restaurants along Whiskey Row), but small enough to make it easy to navigate from trail to trail.

And because Prescott is considerably less well-known than its spectacular sisters, Sedona and Flagstaff, its trails are typically clear of the throngs of people that can clog those other two northern Arizona destinations.