Ode to the Montana road 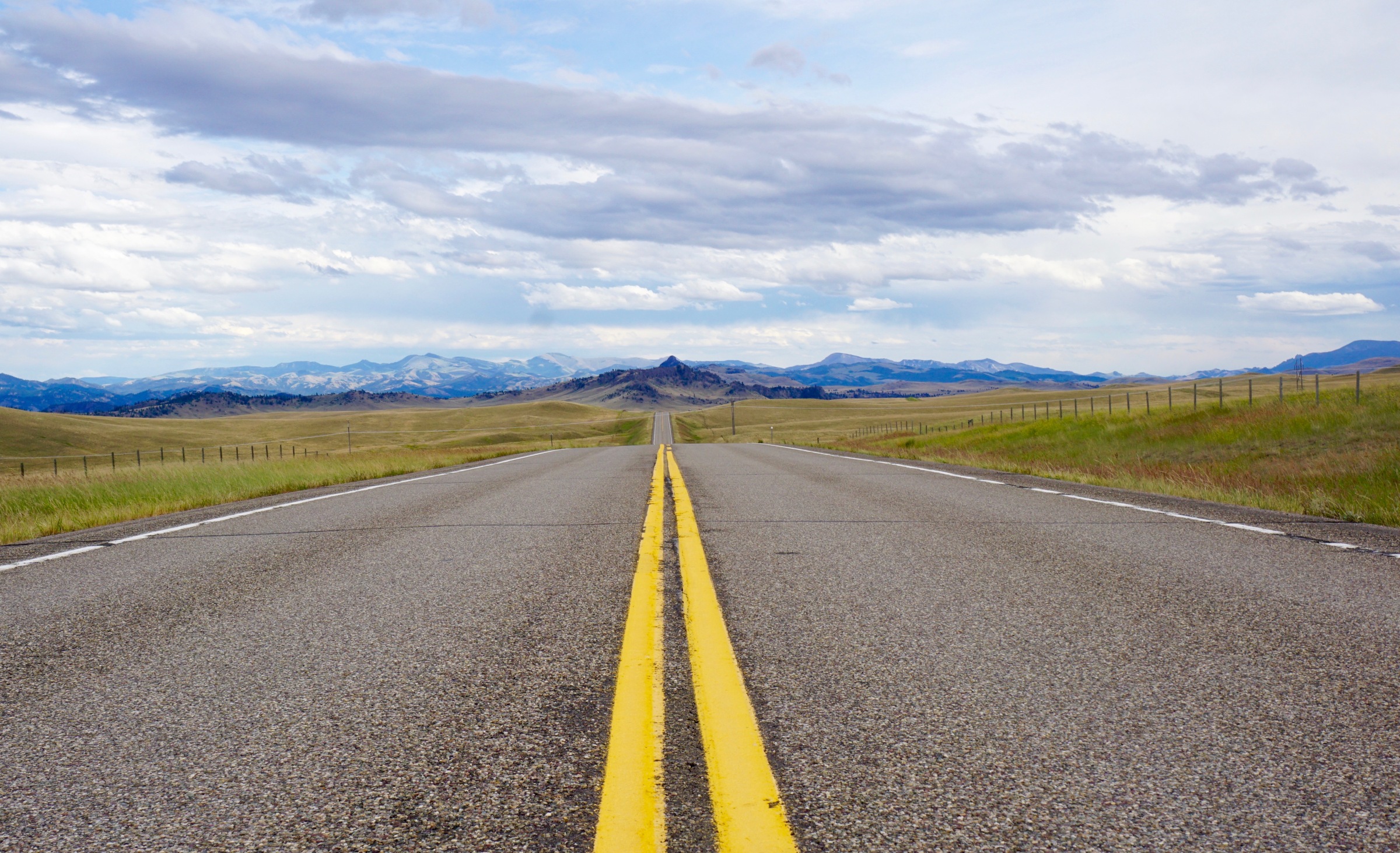 I’ve road-tripped all over the left side of U.S. map. Any state west of the Mississippi? Yep, I’ve put rubber to the road there.

But until recently, Montana sadly was not on the list. For some reason, I had missed the Big Sky state on my trips up the West Coast, through the Southwest, and down the Midwest.

That all changed this summer, when I took the ultimate American road trip – heading straight north from Arizona to Glacier Country in Montana.

And as it turns out, it seems that I saved the best for last. Yes, I’ll say it: Montana is tops for road-tripping in the western U.S, and here’s why:

It really is a big sky

Virtually from the moment I crossed the Idaho/Montana border, and up through Butte, Helena, and little Choteau, the skies were achingly huge. That continued as I reveled in Glacier National Park, and then headed east through the vast emptiness of Highway 200. 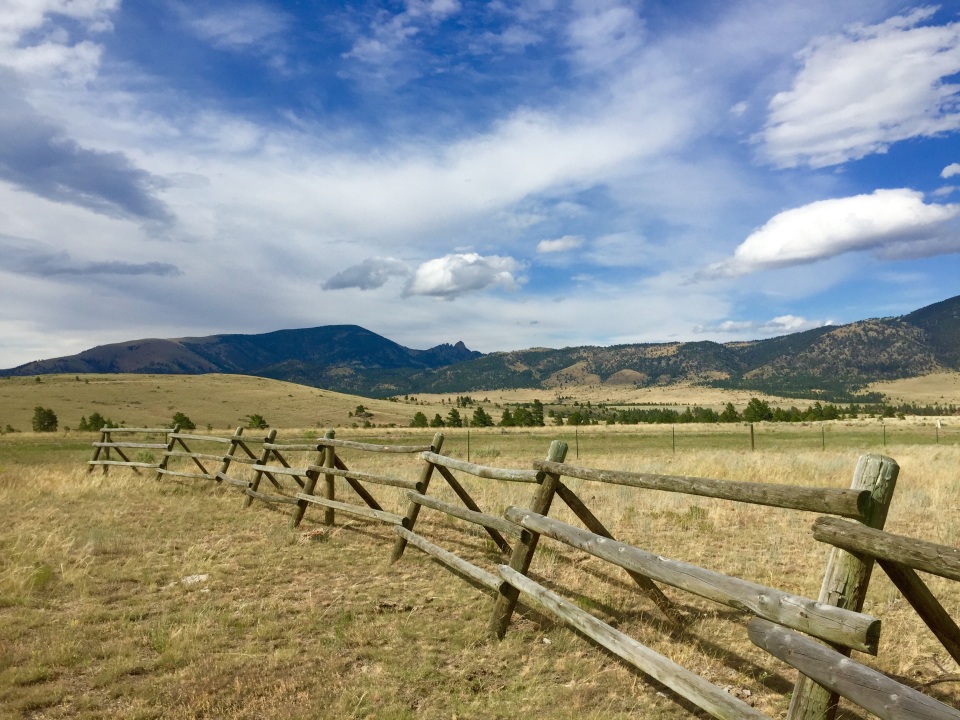 I was going to be definitive and say you literally CANNOT speed in Montana because of the delightful 80-mph speed limits on many of the state’s highways. But then I got a speeding ticket on my last day – somewhere on Highway 16 between Sidney and Glendive – deep in oilfield country. Yes, he got me going 77 in a 65-mph zone. I guess Montana’s wide-open roads had grown on me! 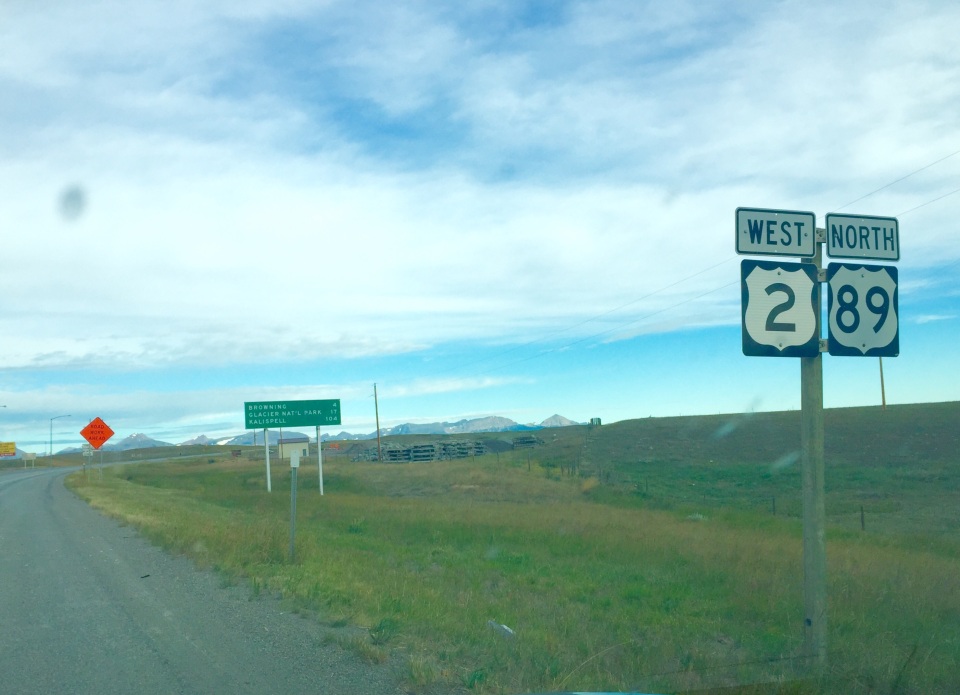 This one took me by surprise. I knew I was heading into some serious mountain terrain. And I knew there would be glaciers. But the ubiquitous wildflowers? That was a bonus. It became difficult to get from one destination to another because I was stopping so often along the road. If it’s flowers you’re after, Montana really can’t be beat. 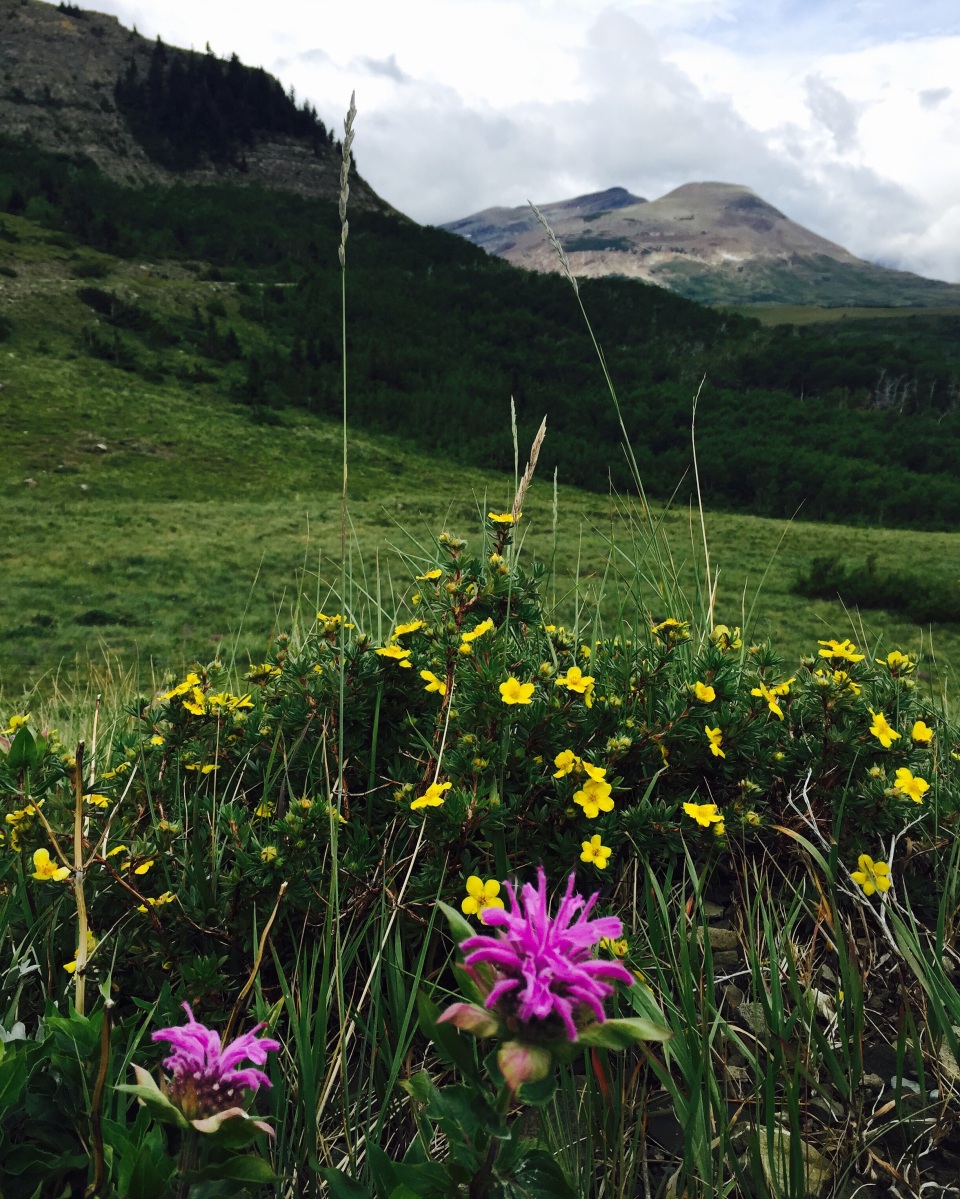 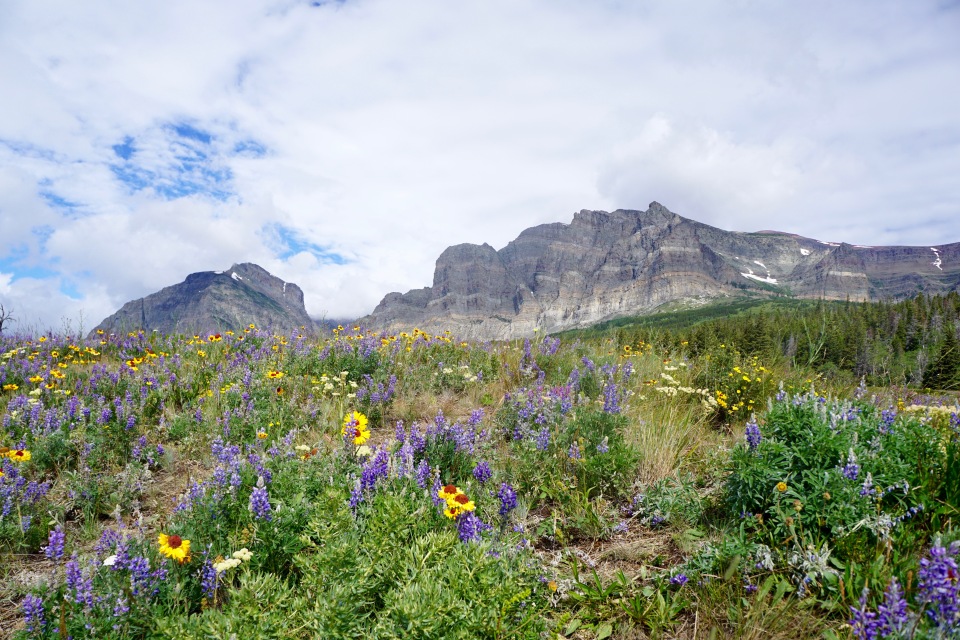 Seriously, a river runs through everything here

From the creeks and gullies of eastern Montana, to the glacier-fed streams and rushing waterfalls of the west, the state is bursting with waterways. And they’re fabulous! 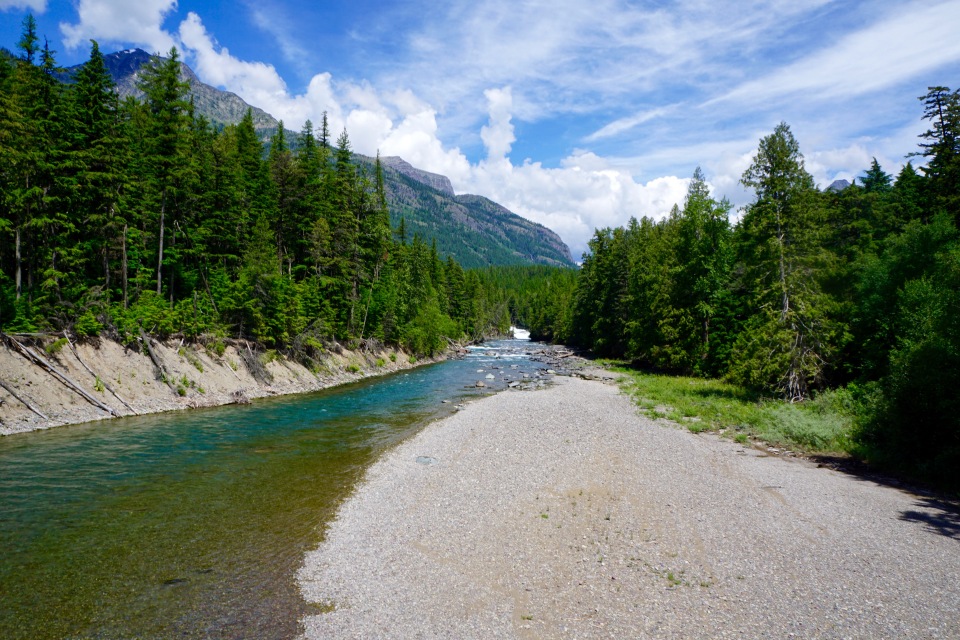 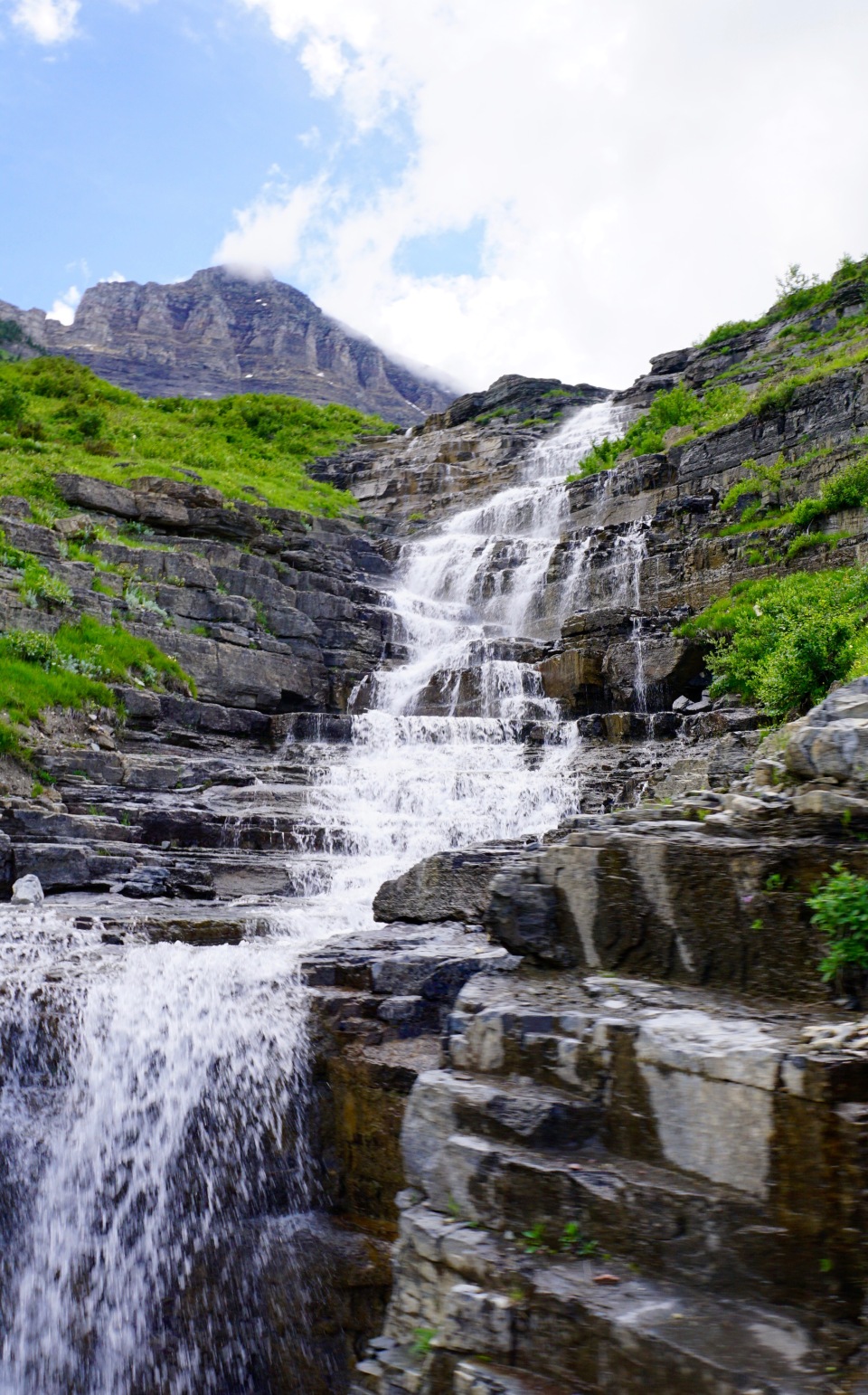 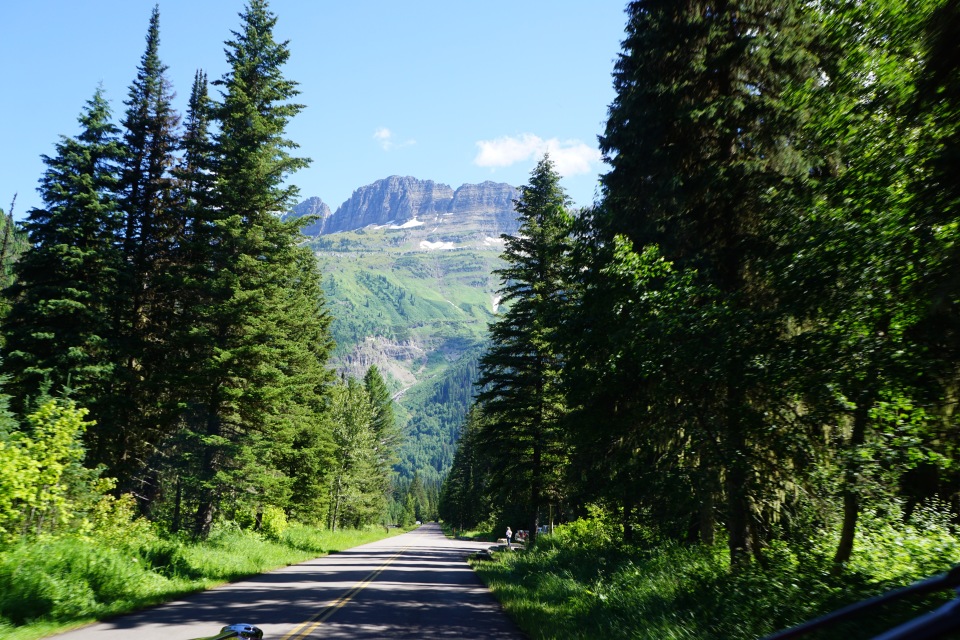 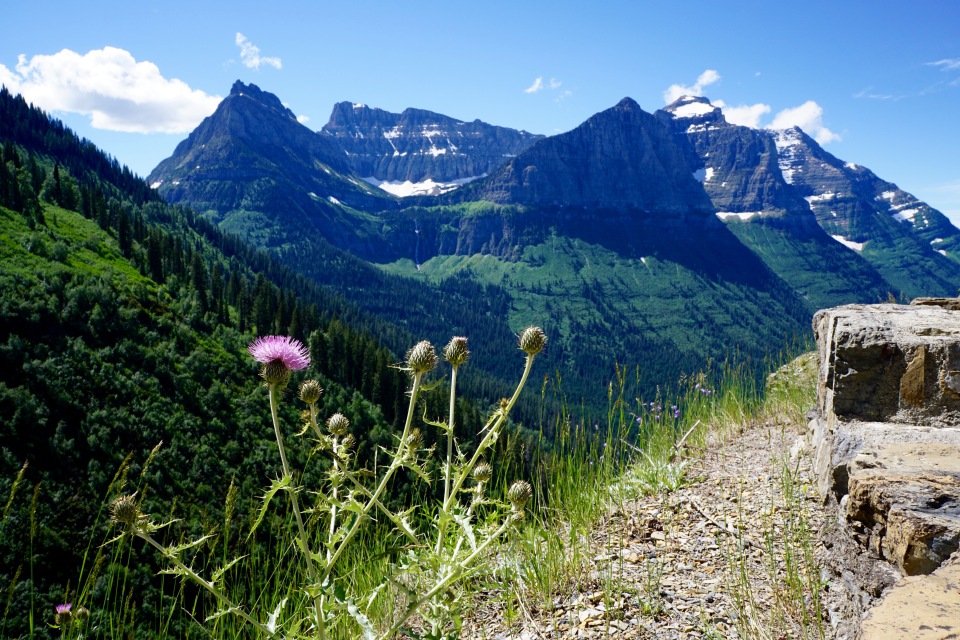 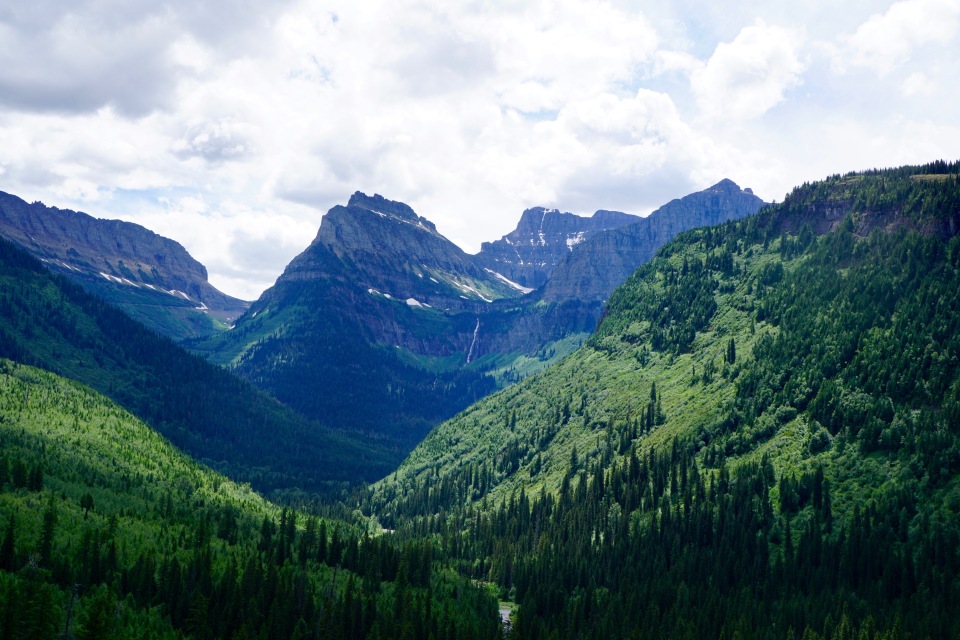 As a traveler who tends to stop often at roadside overlooks and ranch approaches for that great shot of the endless asphalt, I absolutely loved Montana. Partially because there were so many overlooks and approaches with worthy views, and partially because when I did stop, mine was often the only car in sight. That made for plenty of opportunity to stand on the centerline and shoot away. 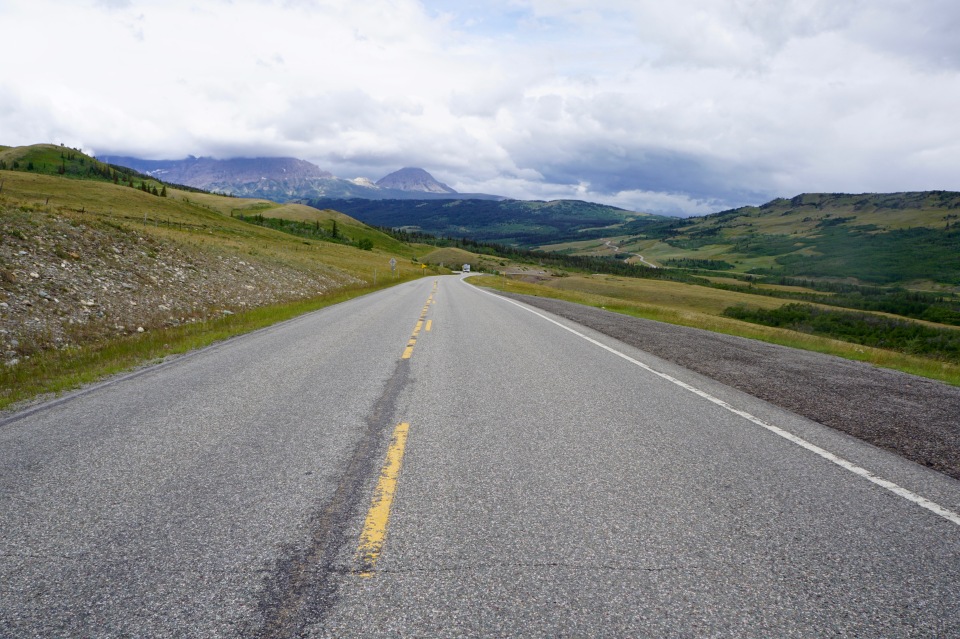 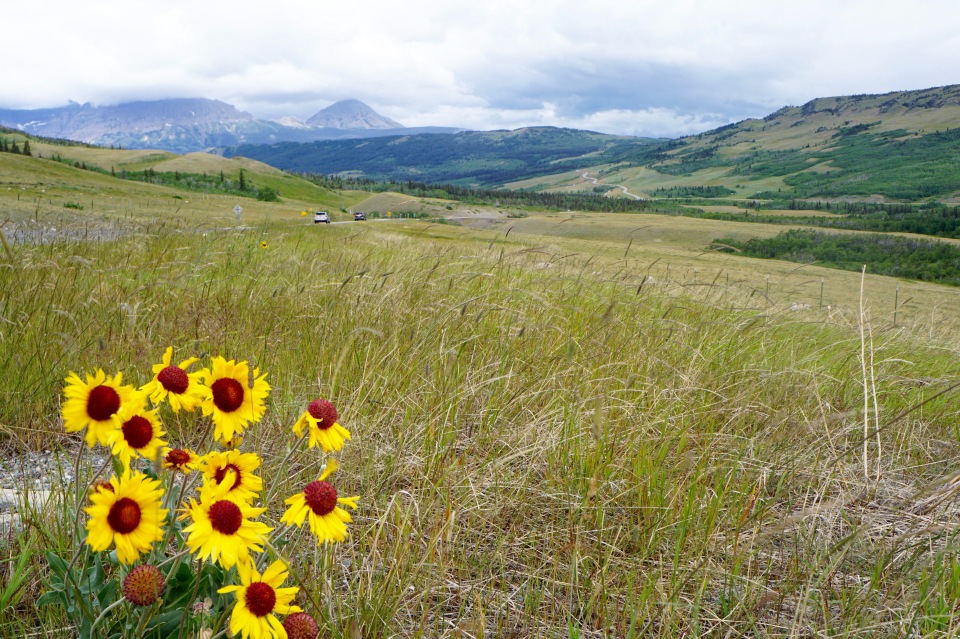 It was lunchtime, and we were heading east toward North Dakota. My son, who had joined me for that leg of the trip, Googled nearby dining establishments, and we decided to give the next bar/restaurant a try. Let’s just say the leather-and-denim-clad man behind the bar didn’t exactly take to me. When we mentioned we were heading to North Dakota, he said, “Ain’t nothin’ in North Dakota” – twice. When I ordered a Diet Coke, he said, “Diet Choke” – twice. The gun over the bar and the grumpy attitude had me gulping my fries and Diet “Choke” as fast as I could and hitting the road. 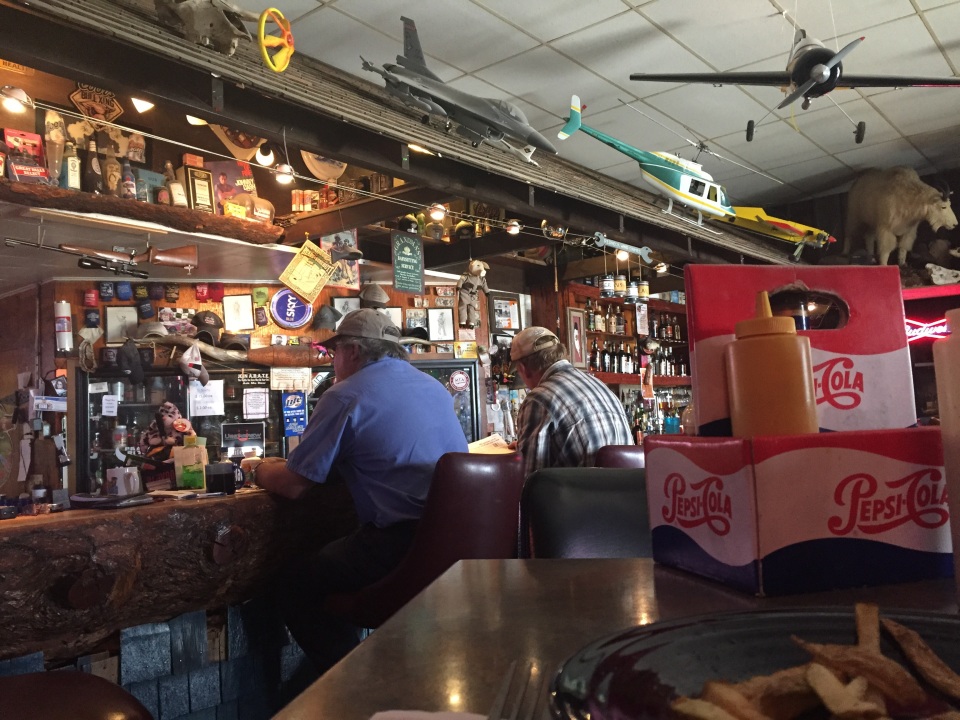 You know you’re in real ranch country when the cattle and horses are given free rein in the ditches and on the roads. Especially on the Blackfoot Tribal land bordering Glacier National Park, happy-looking cows were free-ranging everywhere. And when I traveled to Browning one day on Highway 89, I came upon a pretty little gaggle of horses taking in the scenery. 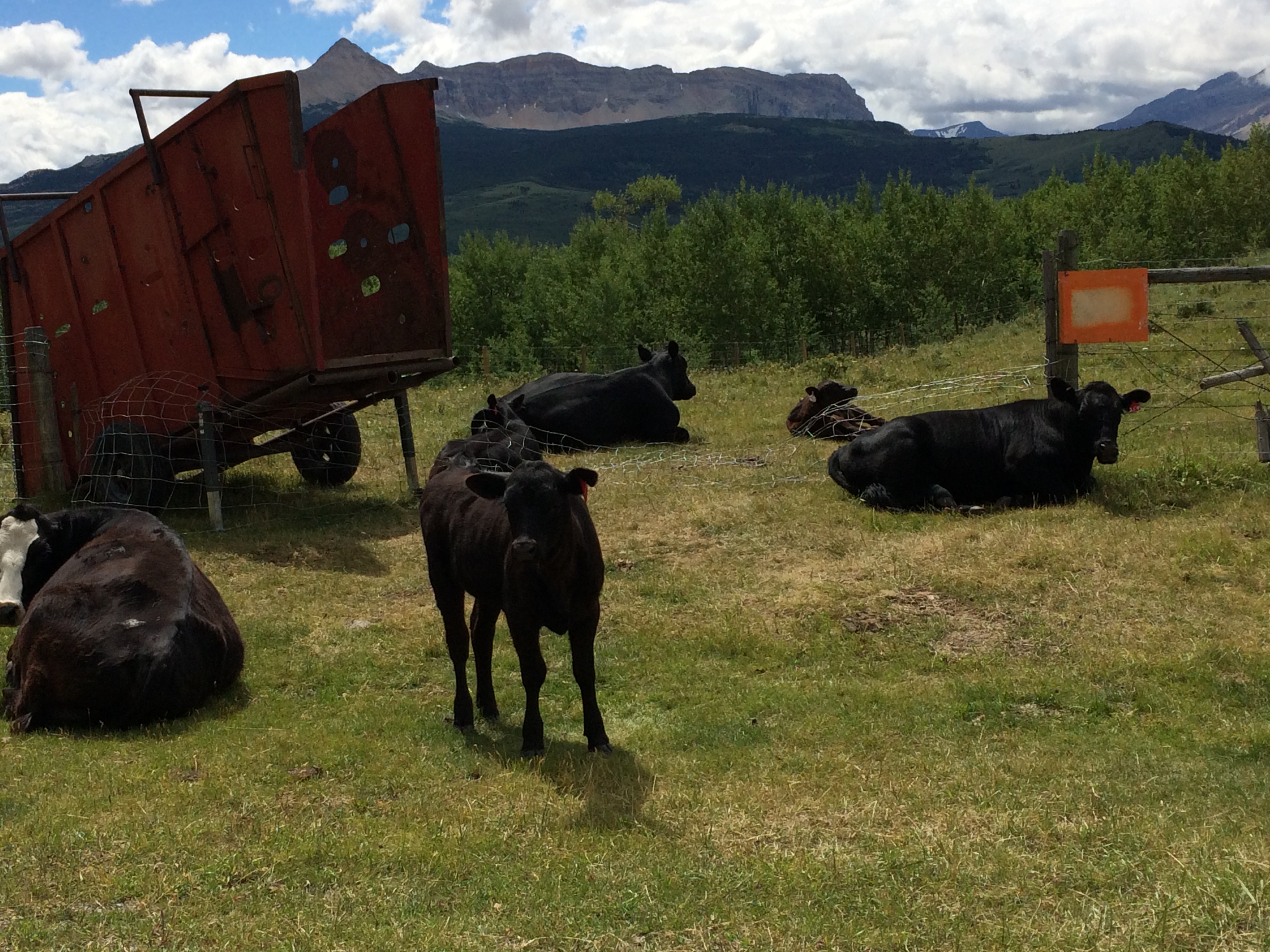 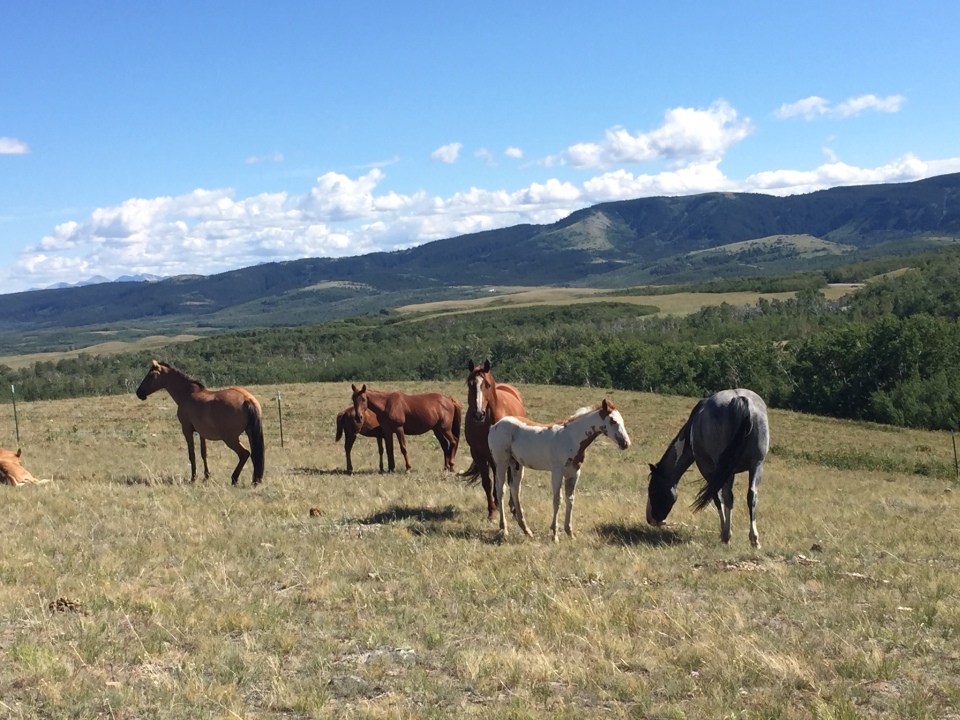 The weather won’t bore you

The variations in temperatures were enormous – even within the six days I spent in Montana. It went from 46° F on the evening of my arrival in East Glacier, to about 80° the next day for my Red Bus Tour on the Going-to-the-Sun Road. The next day, when I returned to Logan Pass to hike the Highline Trail, I ran into a thick soup of fog. Still, the day after that was beautiful and sunny for my hike to Iceberg Lake. It definitely keeps you on your toes! 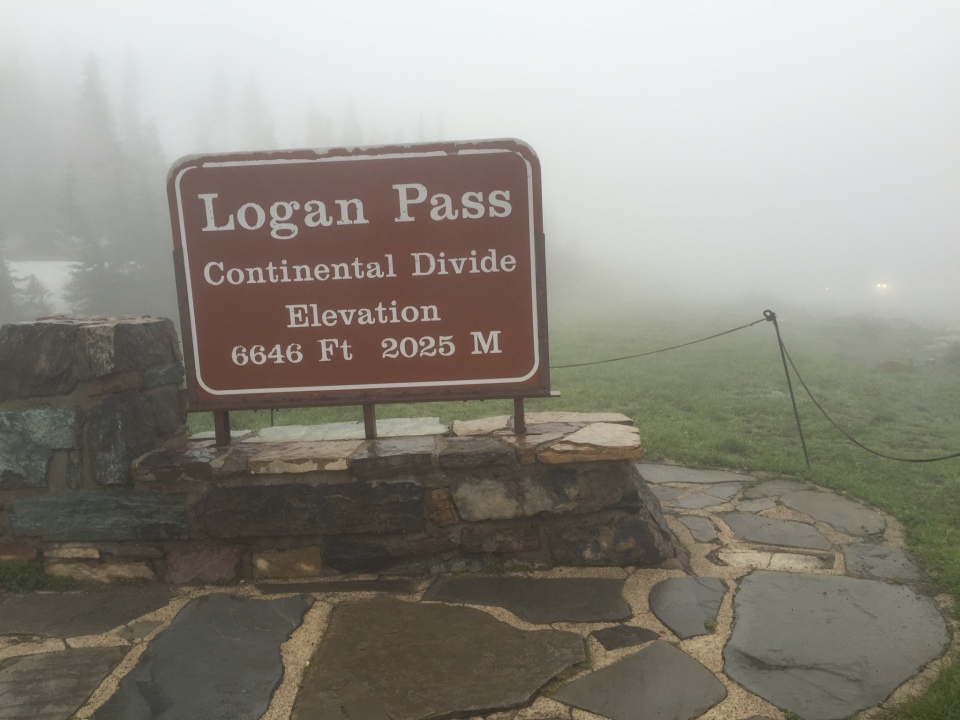 Do colors GET any more vivid?

Even without the wildflowers, the hues in Montana seem deeper and more varied than anywhere else. I drove to the Many Glacier area three times during my visit, and each time, I could hardly keep my eyes off the startling color contrasts. 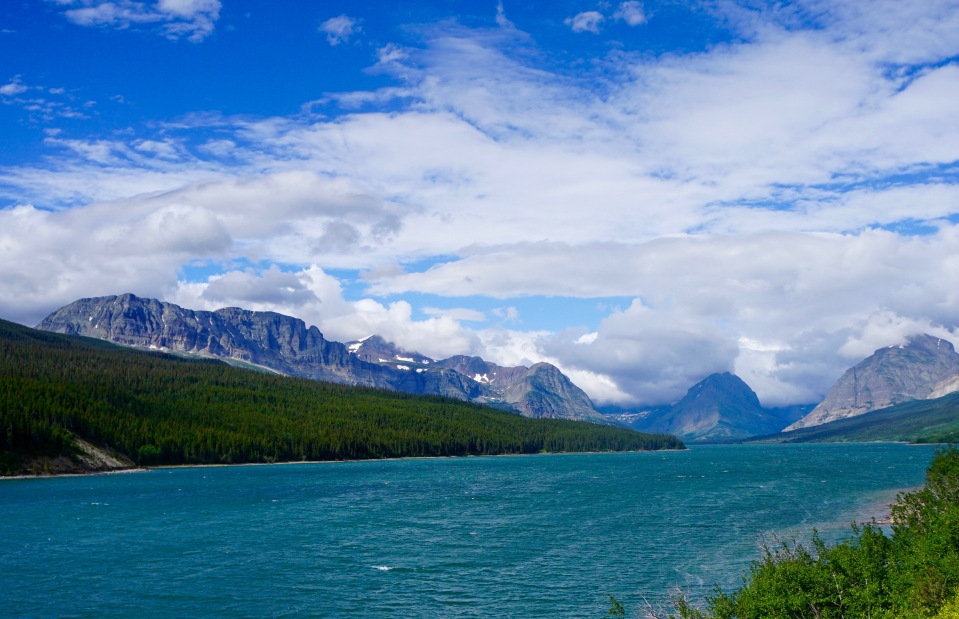 (As you might have guessed, I highly recommend driving through Montana. You don’t have to take the extreme road trip route I followed. Fly-and-drive options are numerous. I talked to several visitors to Glacier who had flown into nearby Kalispell and rented a car. Also, the airports in Great Falls, Helena, and Butte offer flight options).

Posted on August 2, 2016 by nearandfaraz

5 Comments on “Ode to the Montana road”