San Francisco: A treat – even in the rain

You know that feeling you get when you return to a place you love? You know exactly what you want to do, and you’re excited to get started? That’s how I felt on my most recent trip to San Francisco.

I arrived on the day before my birthday, and I couldn’t wait to hit the streets. Just one little problem, however: Rain. The online forecast for the weekend was all clouds, umbrellas, and raindrops.

View from under the umbrella

Still, as I checked into my hotel on that slightly dreary Friday morning, I was encouraged by the attitude of the hotel concierge. “We’ve had worse,” he said when I asked him about the weather. With that, I tucked an umbrella into my tote and headed off.

Although I’ve visited San Francisco a number of times over the past eight years and experienced all types of weather, this trip was unique in one way: It was the first time I was completely on my own. When none of my friends or family members could get away to join me, I saw it as a perfect opportunity to come up a personalized agenda of favorites.

So here goes – my very own list of San Francisco treats: 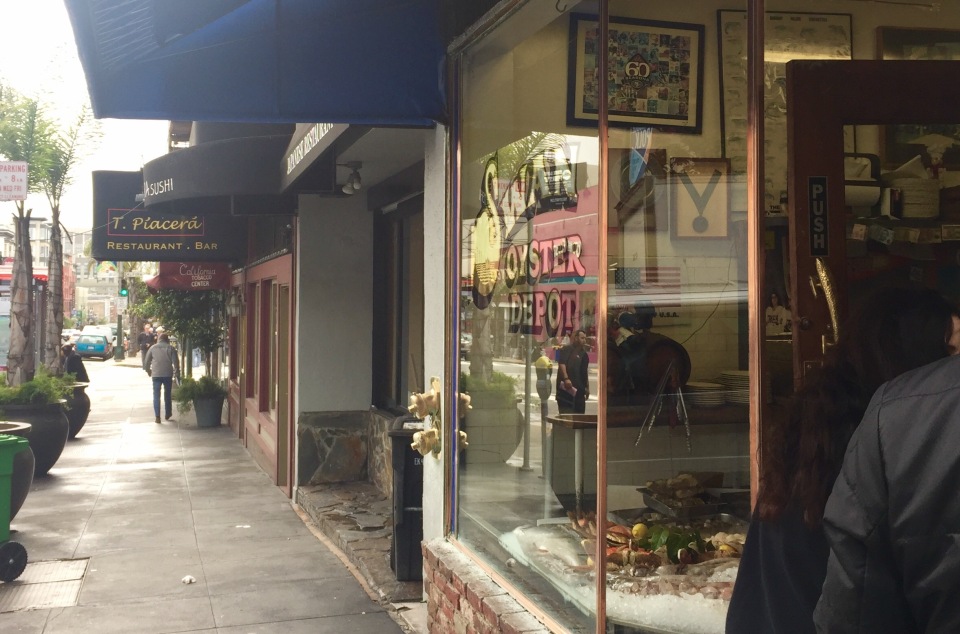 Ever since I had watched Anthony Bourdain dig into huge platters of crab and oysters while sitting at the bar at Swan Oyster Depot in an episode of his CNN show “Parts Unknown,” the Polk Street café had been on my list. But for some reason, I had never made it to the somewhat off-the-beaten path location.

I was determined this time, even though I had been forewarned about the long lines. So, as soon as I checked into my Union Square hotel, I headed out on the 20-minute walk to 1517 Polk Street. The rain was probably my friend in this case, because only about a half-dozen people were waiting at the door when I arrived at about 10:30 a.m. The line moved fairly fast, and I snagged a stool in less than 30 minutes.

The atmosphere was casual, and the pace was quick: Servers cracking crab, slicing sashimi, shucking oysters, and taking orders in-between. It’s a no-nonsense kind of place – just what I was after that morning before heading out for a busy day of exploring.

Crab is an all-time favorite, and I ended up ordering a crab cocktail with Louis sauce, and a cup of clam chowder – both good choices, although the crab was definitely the star. The cocktail bowl was stuffed with delicate, flaky crab meat, and the Louis sauce was tangy/sweet.

Of course, oysters were popular with most everyone else 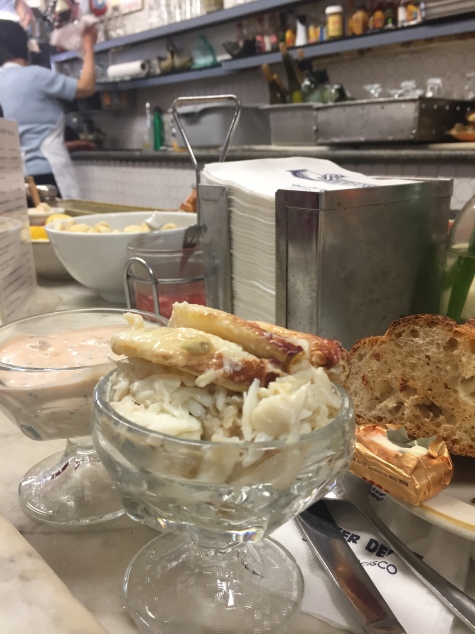 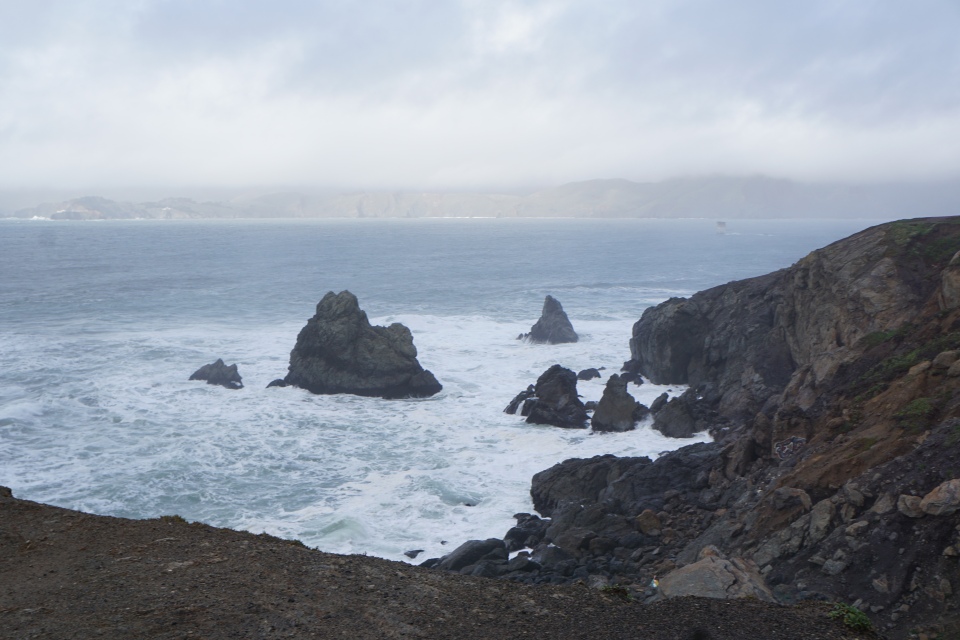 The Land’s End Trail was another spot that had been on my SF must-list for years. But, located on the far western side of the city, it just never seemed to fit into my schedule. Even though the weather wasn’t optimal for hiking that day, I decided that it was now or never.

From Union Square, I hopped on the 38 Muni bus, and rode it along Geary Street through the rolling avenues, until I reached 33rd Ave. where I caught the 18 bus toward the Legion of Honor. There, to the left, the Land’s End Trail begins descending toward the sea. It’s a lovely path through rain-forest-type terrain, and then you emerge onto the cliffs overlooking the Pacific Ocean!

Of course, you’re pretty exposed to the elements there, and I ran into a little wind-rain squall along the cliff trails. At that point, there really isn’t any other option but to keep going, so I continued on toward the ruins of the Sutro Baths (great history!), and then The Cliff House.

By the way, the trail’s a beauty, raindrops or not. 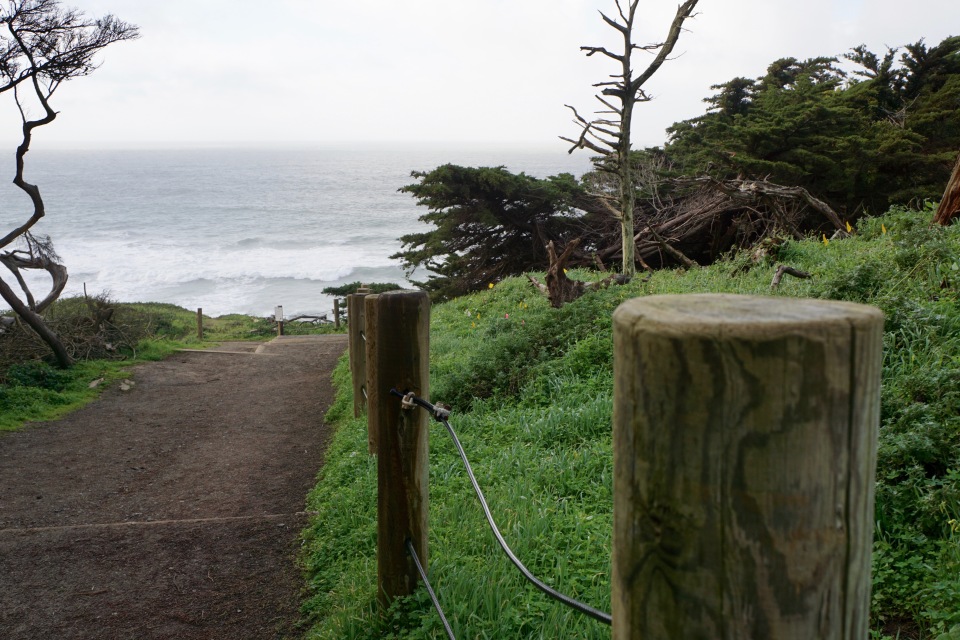 I’ve walked by San Francisco’s theater district many times on my way between Union Square and the hotels and restaurants along O’Farrell Street. I always look wistfully at the Broadway-type productions going on there, but never had the chance to check them out.

As I was planning this trip, I did a quick google search of “things to do in San Francisco” on the weekend of Feb. 4. There, on the list was a production of one of my favorite books ever – “A Thousand Splendid Suns” by Khaled Hosseini, who also wrote “The Kite Runner.” I decided I couldn’t pass it up. The play didn’t disappoint – stunning sets, great acting, and a beautifully told story. The matinee production was definitely a fun and unique way for me to spend my birthday afternoon.

Technically, I wasn’t supposed to take photos in the theater, but I snapped this of the pretty ceiling before the start of the play (and before I knew the no-photo rule 🙂 )

To be honest, the Sir Francis Drake Hotel was not a conscious choice for this trip. I booked it through Priceline’s Express Deals, and didn’t know for sure which hotel I would get until after the transaction was final. But it turned out to a lucky move (and a good deal!). I loved the hotel’s elegant lobby, the 20th-floor room I was given, and especially, the Union Square location. I felt like I was close to everything. Muni bus stops were nearby, the theater district was just a few blocks away, and cool shopping was just down the street. 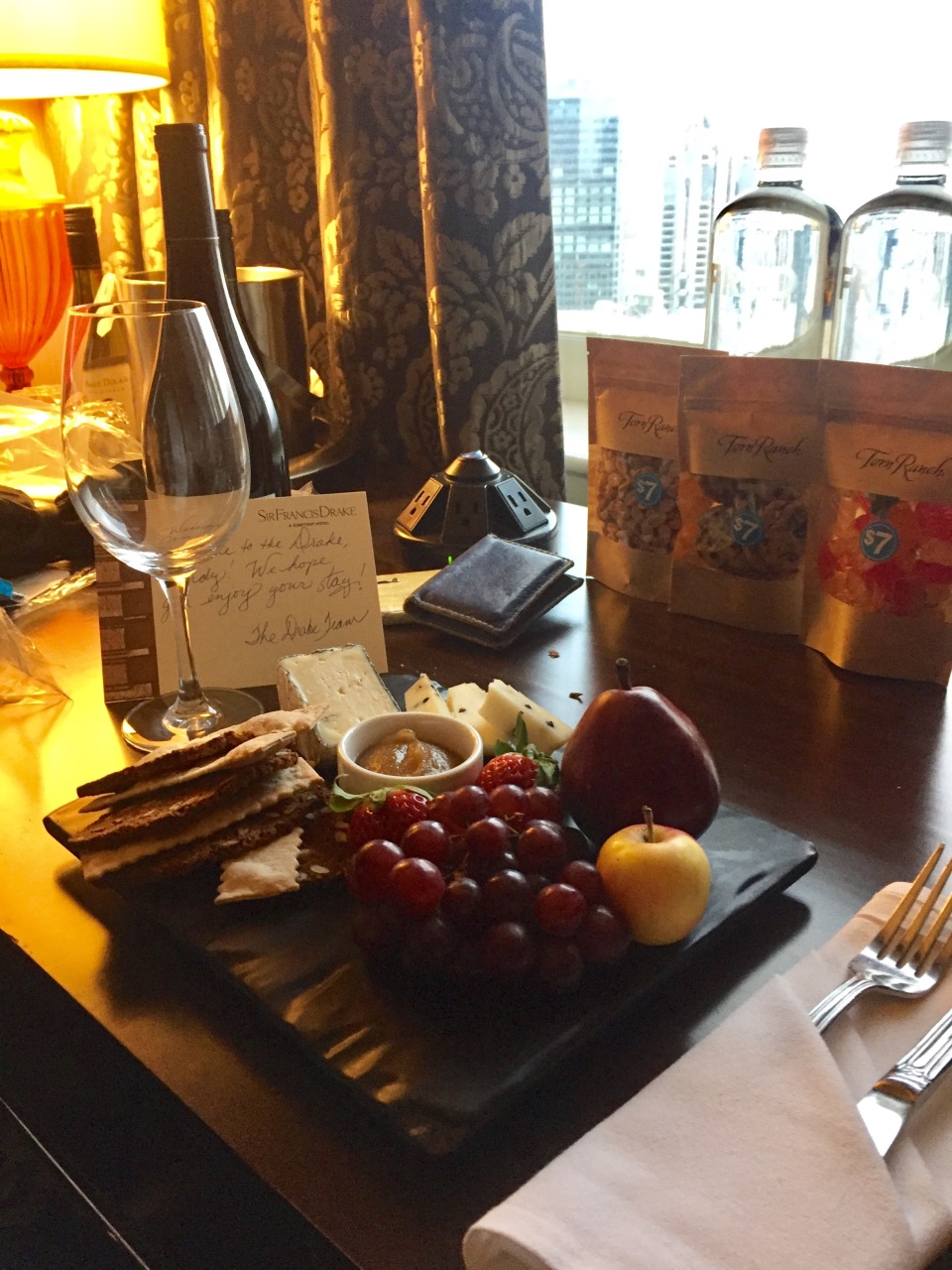 Such a nice welcome from the Sir Francis Drake!

The hotel lobby is splendid

My room was charming, and it had a view!

Loved the view of Union Square from my 20th-floor room

The view from the entrance isn’t bad either

What can I say? I simply love San Francisco’s Ferry Building. And on Saturdays, when the farmers market is in full swing, I can’t resist visiting. I decided to have brunch there on the morning of my birthday, and I had a hard time choosing: Miso soup, lox and bagel, tamales, or Arab street food? The sight of pitas being freshly grilled on a rounded griddle caught my attention, and I opted for a pita wrap with grilled veggies and herbs. Lovely!

One of the advantages of a rainy day – beautiful puddle reflections

I might be a little obsessed with this building 🙂

The produce is pretty amazing too 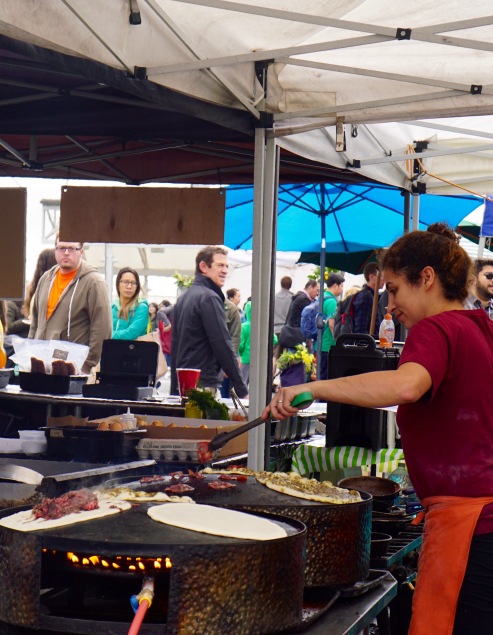 I indulged for my birthday dinner at Scala’s, the charming bistro located at my hotel. From the warm marinated-olive appetizer to the saffron linguini + clam entré to the luscious chocolate-mousse-and-hazelnut-cookie dessert (complimentary for my birthday), the dinner couldn’t have been better. Oh, and the two glasses of Cabernet helped too! 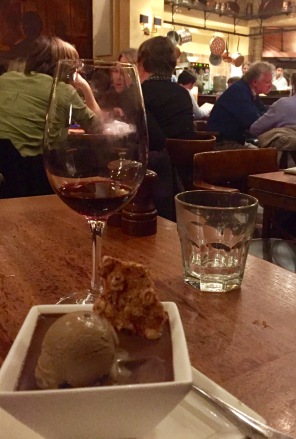 In my mind, every trip to San Francisco should include a ride on the famed cable cars. OK, I know they’re touristy and crowded, but still! There IS one way to avoid most of the crowds, though – opt for a late-night ride. When I boarded at the corner of Powell and Sutter after my dinner at Scala’s, I was one of only a handful of people riding. And when I returned over Nob Hill at about 10:30 that night, it was just me and two other people. An added bonus: The city lights and steep drop down Powell Street give the night-time ride the feel of of a roller-coaster. Thrilling! 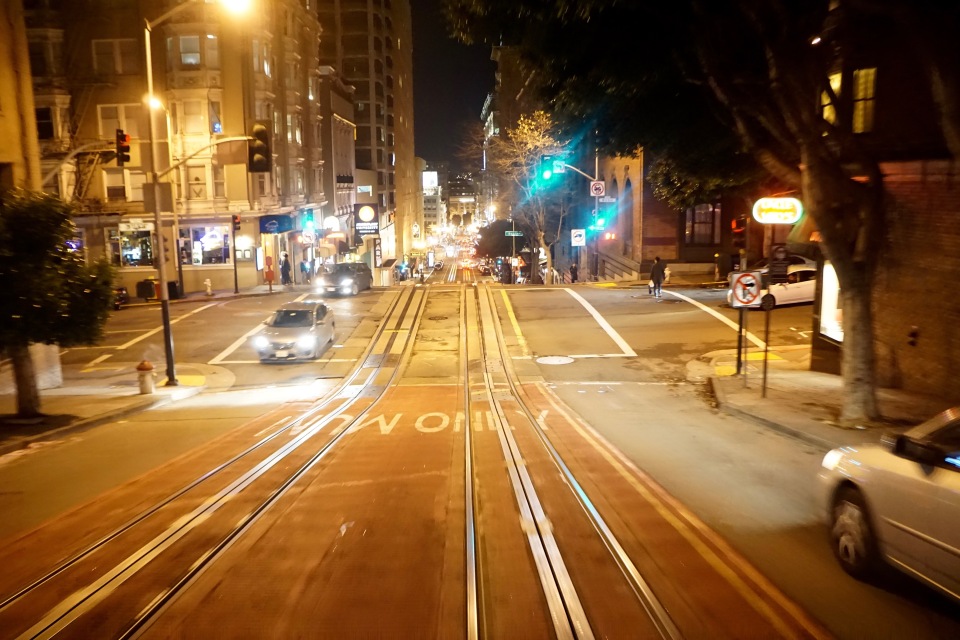 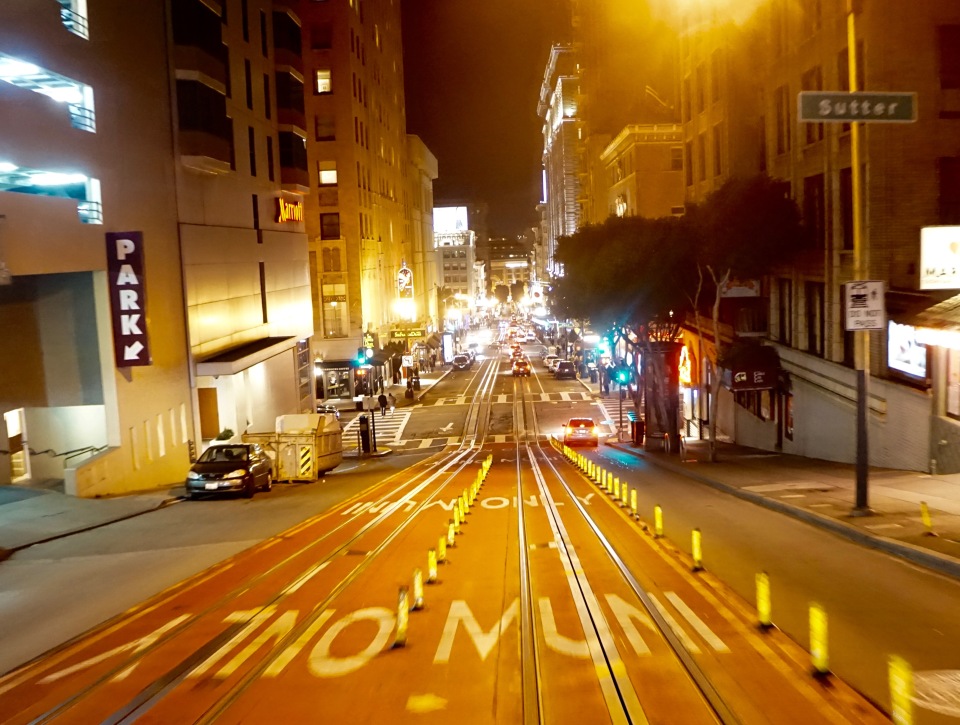 Irish coffee at the Buena Vista

I found out when I arrived at the Buena Vista late on a Saturday evening that I was a living San Francisco cliché. I sat down at the bar and ordered an Irish coffee, only to hear everyone around me ordering the same drink. It seems that the historic café near Fisherman’s Wharf is widely known for its signature Irish coffees – dating back to the early 1950s. Still, it WAS a good coffee – and surprisingly boozy! 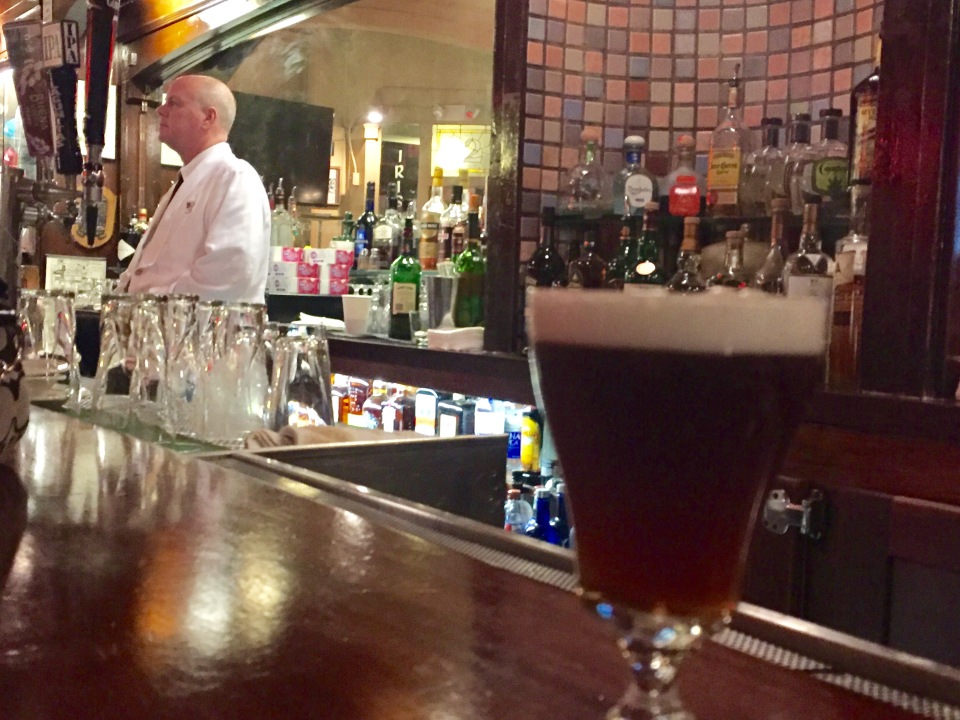 For me, no trip to San Francisco is really complete unless I visit Ocean Beach. And once again, despite the rain, I took a stroll down the boardwalk. When I posted a photo of the scene on Instagram, a follower commented, “But soooo cold! The coldest part of the city.” All I could say was “It speaks to me.” 🙂 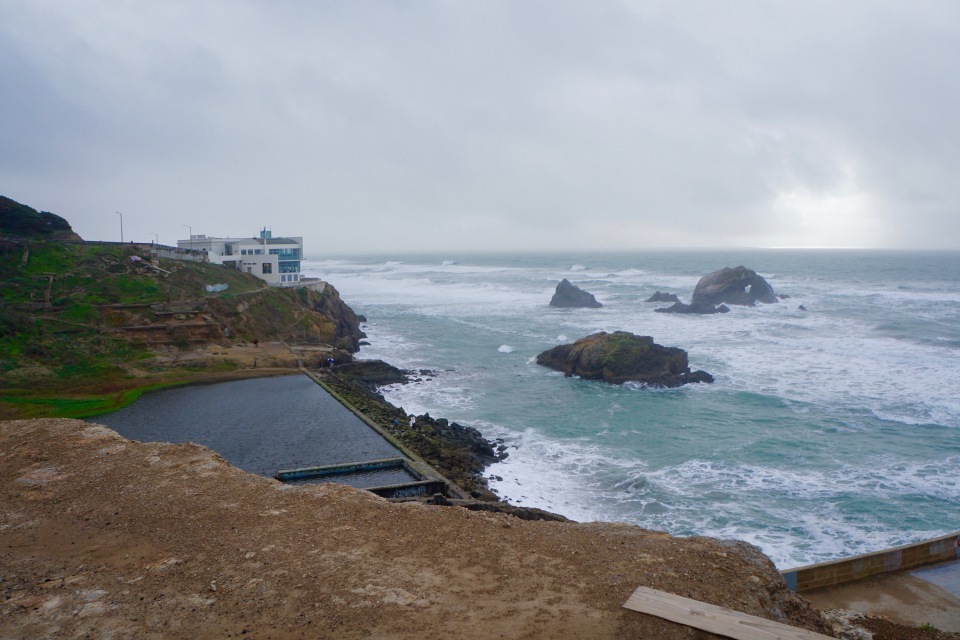 ← Yes, we get snow in Arizona, and it’s spectacular
Paradise – Arizona style →