A Hike and a Brew: Milwaukee, Wisconsin 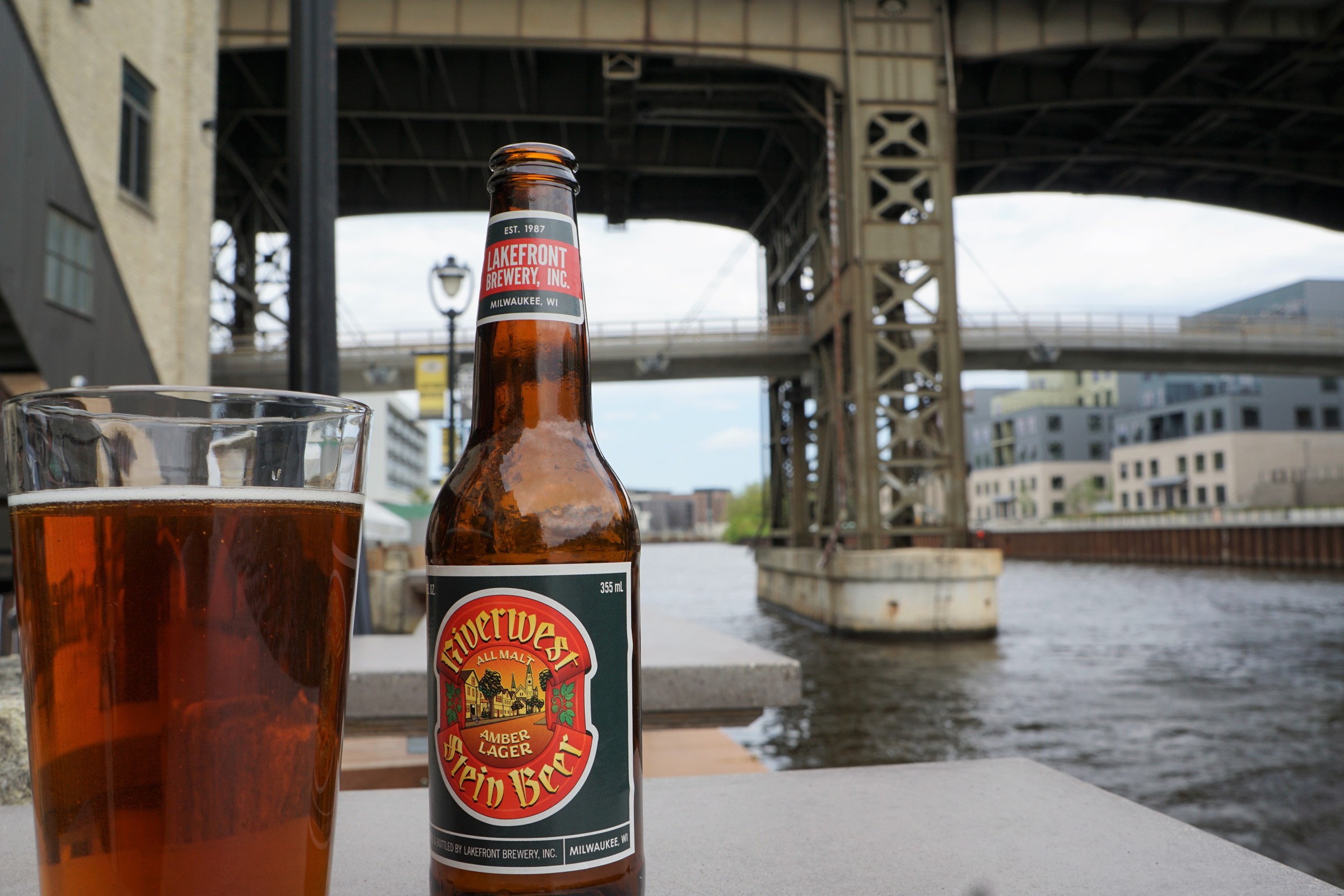 When it comes to life’s simple pleasures, I believe there are few things that can top a walk through beautiful scenery, capped off with a bite to eat or a frosty brew (or both!) in an out-of-the-way café or brewery.

Along the way, I plan to feature treks through the stunning, rugged terrain so common in the U.S. Southwest, as well as strolls through the fascinating city centers that I love to explore all over the U.S. and around the world.

Every now and then, the two converge for an extra-special adventure of gorgeous hiking and charming city sidewalks. (Sedona, AZ; Durango, CO; and San Francisco, CA come to mind).

For my introductory “A Hike and a Brew,” I am heading to a city that is virtually synonymous with beer – Milwaukee, Wisconsin.

Although Milwaukee has a number of nicknames – MKE, Cream City, City of Festivals – I like the simple “Brew Town.” After all, it WAS beer that made Milwaukee famous all those years ago.

These days, the city has transformed from the heyday of its massive beer industry into a hub of fun craft breweries and scenic riverside trails. 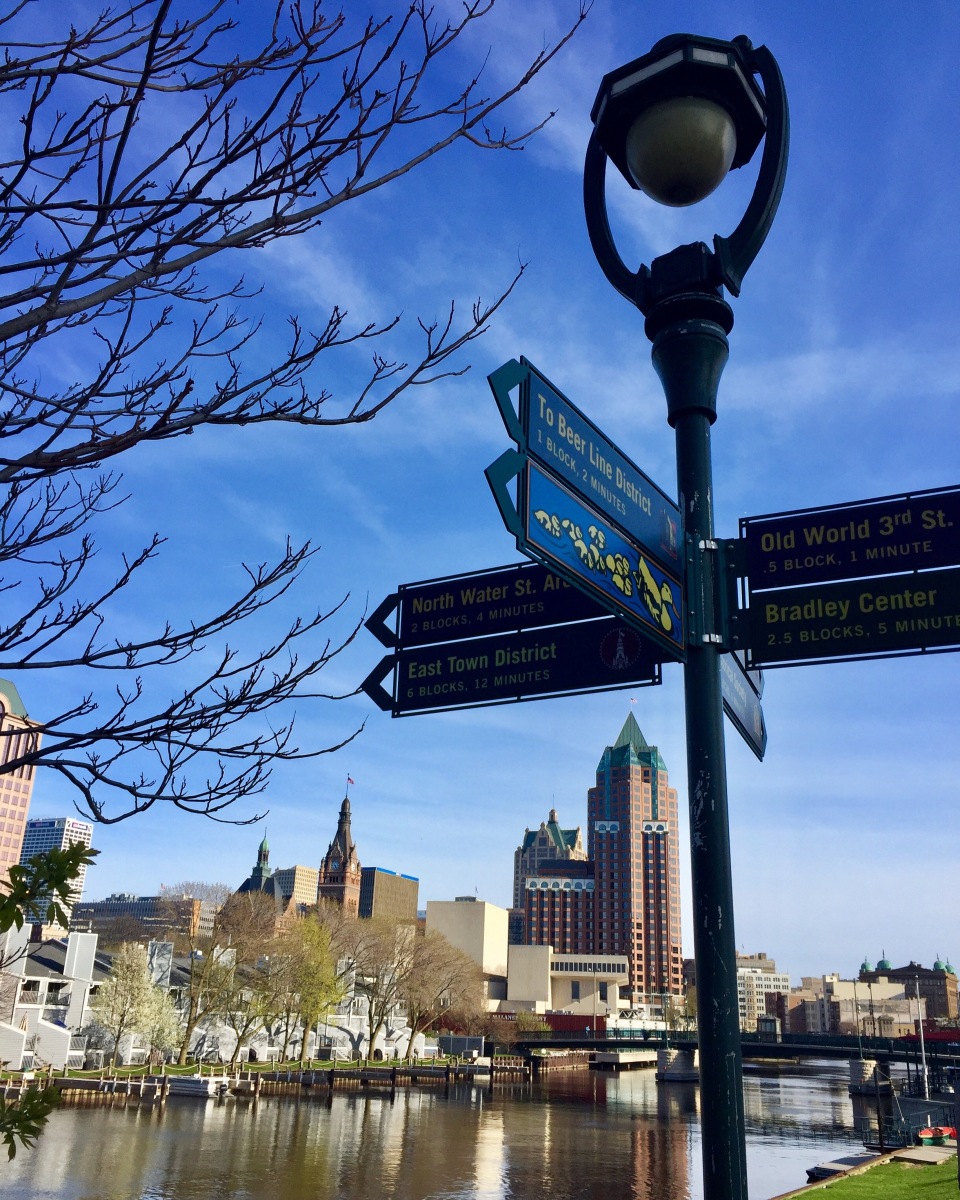 On my recent trip I set out to see the city from the Riverwalk, a wide concrete path that follows the Milwaukee River through the downtown area. 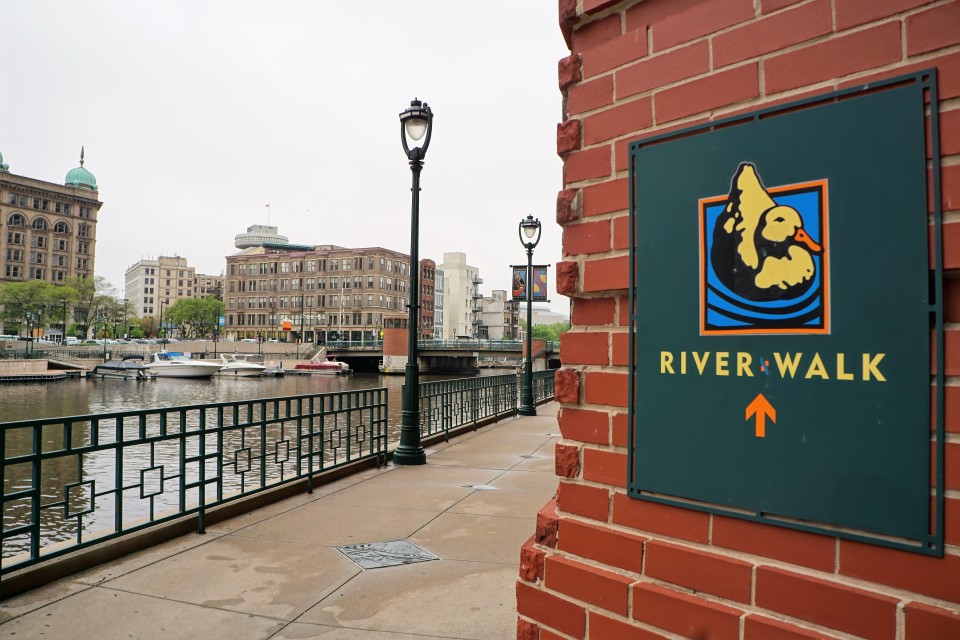 I must say that it came in very handy that, along with a great selection of local beers, the taproom also served Wisconsin’s other specialty – cheese. A flight of beers and a cheese board were definitely in order! 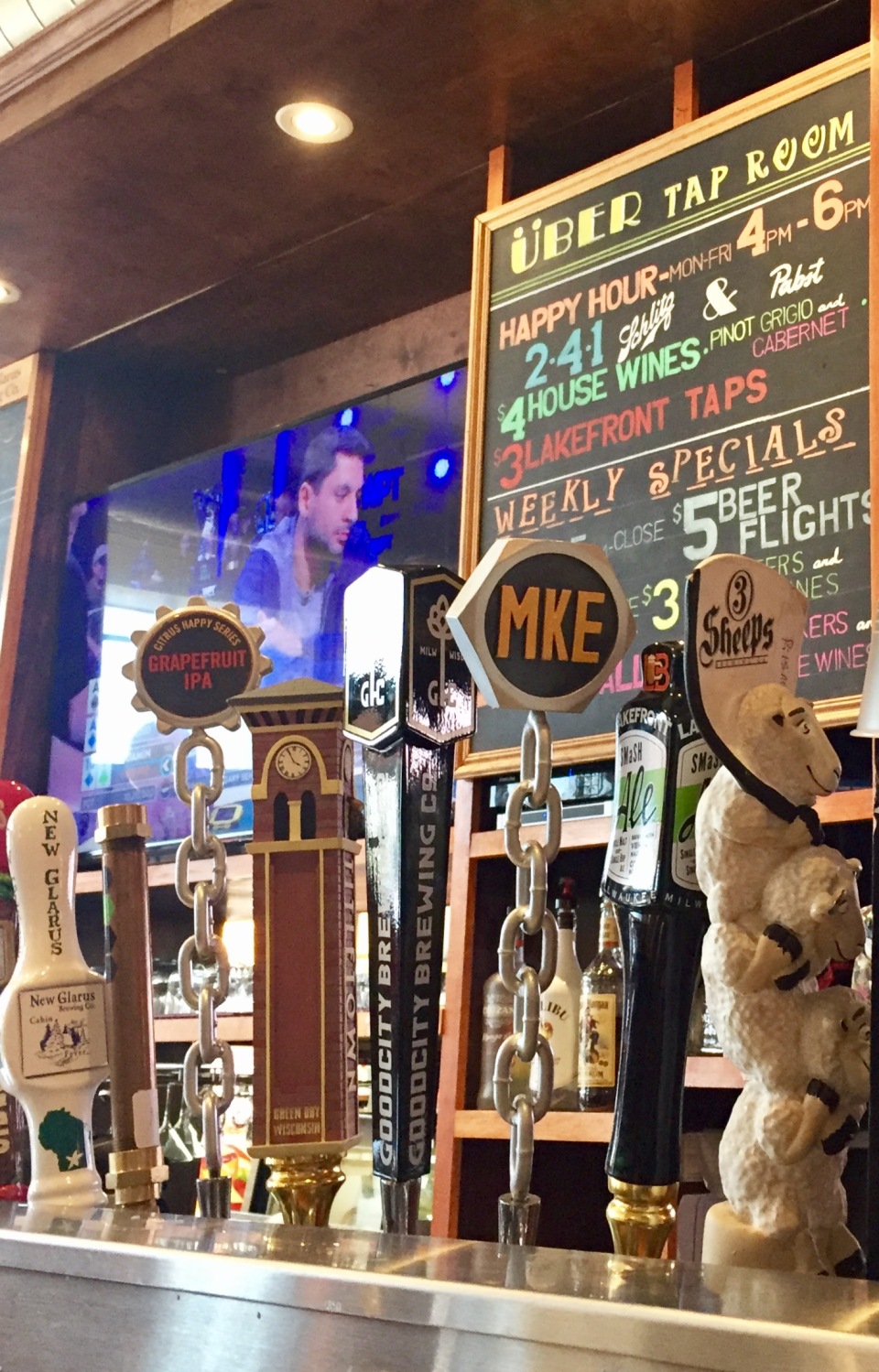 Once on the Riverwalk, I loved the springtime flowers that were just starting to bloom, the rowing teams that were gliding across the shining river surface, and the quirky public art dispersed along the trail. 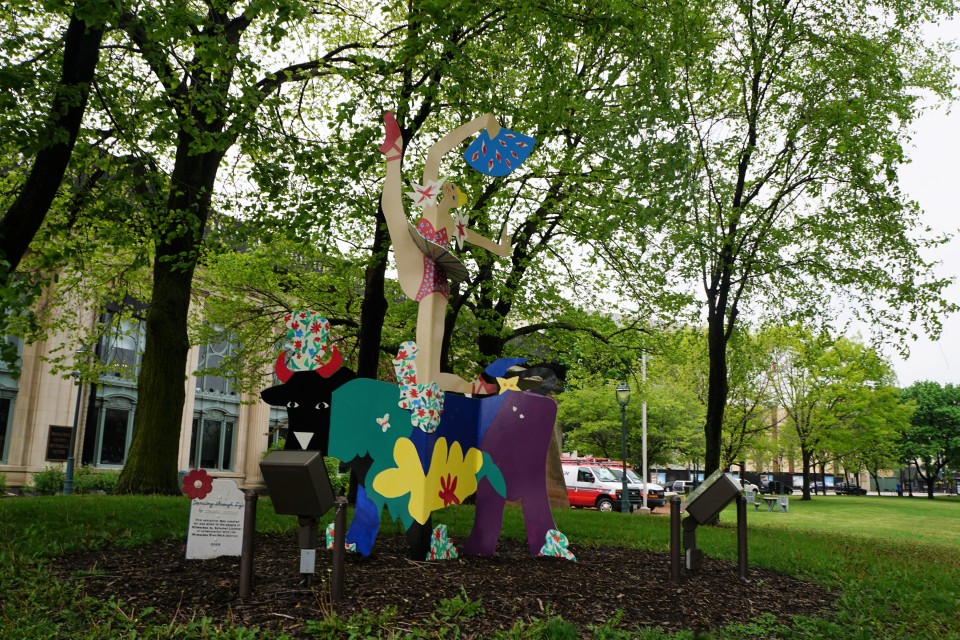 Not far from the downtown, the Riverwalk passes by the popular Lakefront Brewery, a cavernous old coal-fired power plant that was converted into a brewery in the late 1990s. The brewery does a brisk business in draft and bottled beers, with names like Riverwest Stein Amber Lager, Happy Glamper Ale, and Eazy Teazy Tea-Infused Ale. Lakefront’s bottled beers are sold all over town, but sometimes you just have to go to the source. 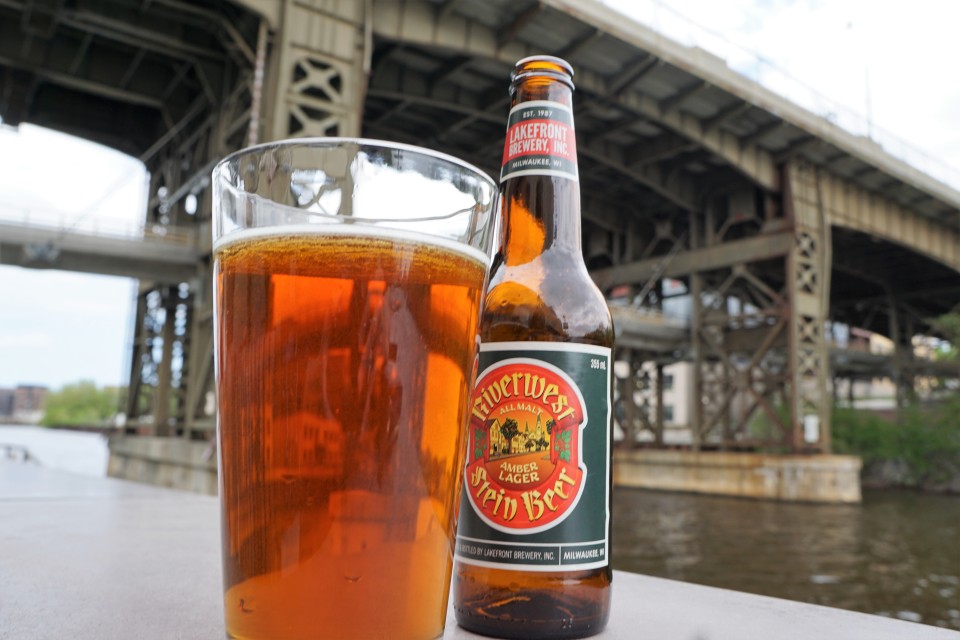 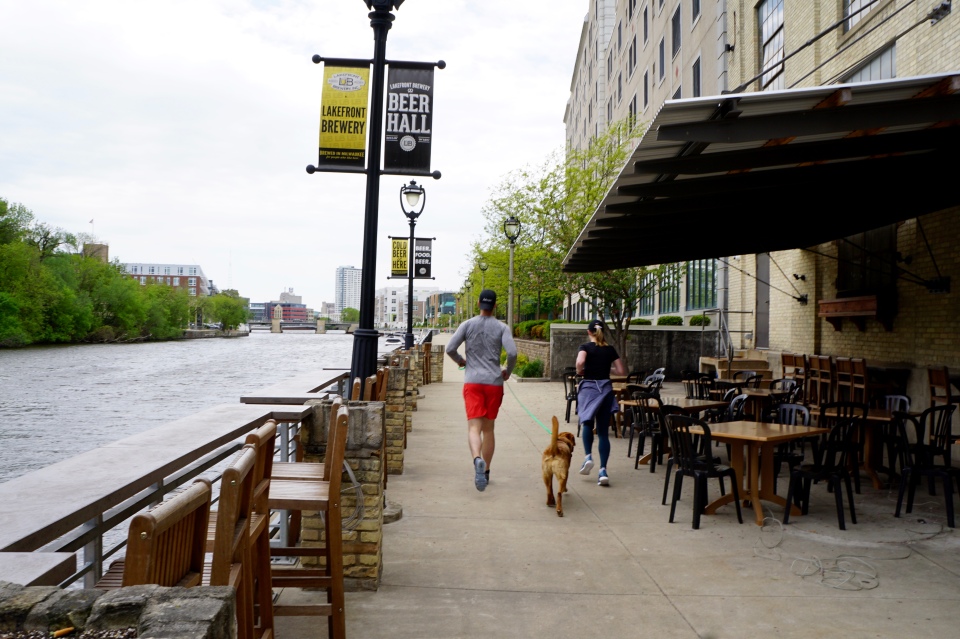 Situated right along the Milwaukee River, the brewery’s outdoor patio seating offers a sweeping view of the Holton Street Viaduct Bridge, with the impressive Marsupial footbridge below it. 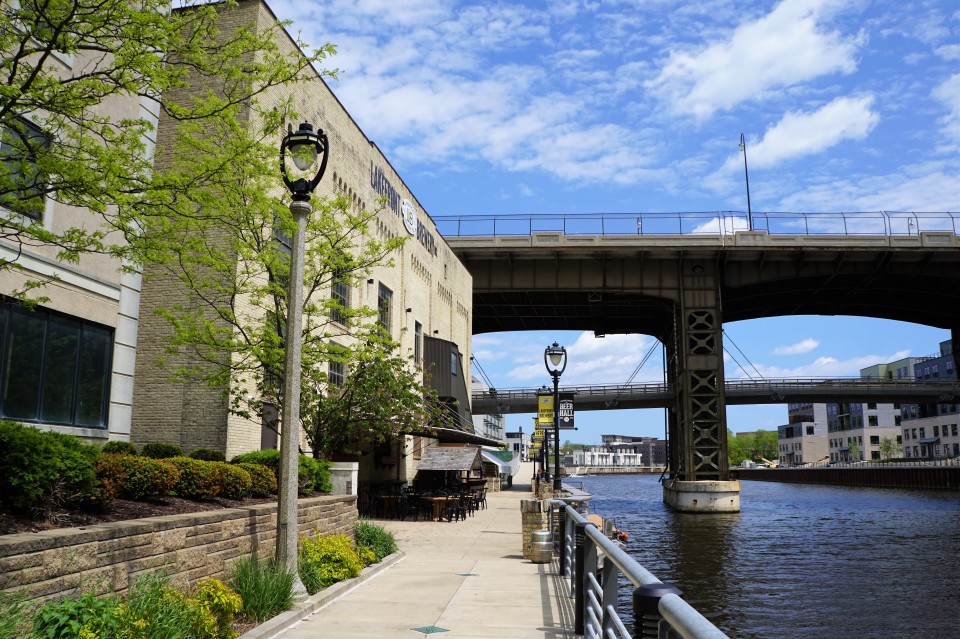 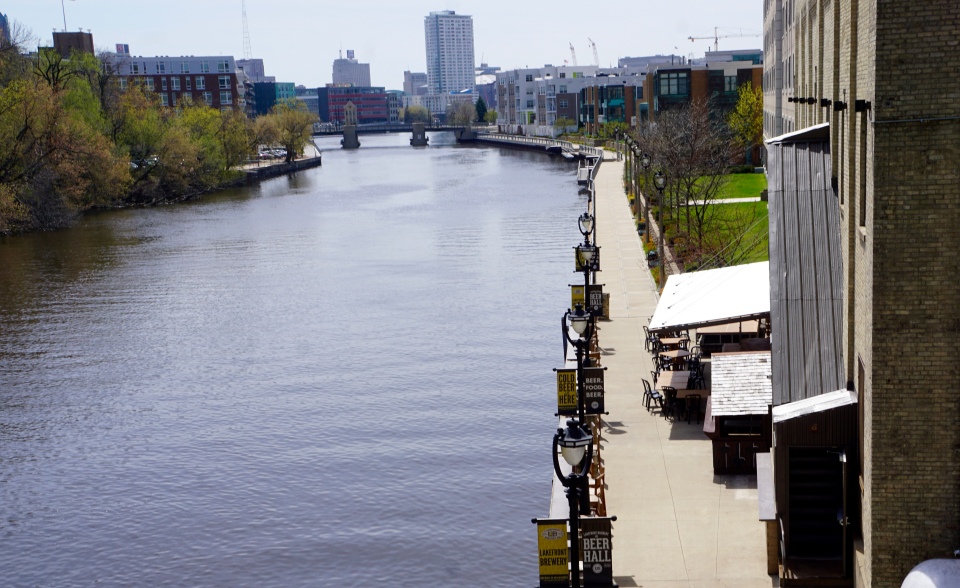 After the Lakefront Brewery, the scenery transitions once again to a quiet, leafy refuge, where frequent bridges offer unobstructed views of the river and skyline.

Keep going on the Riverwalk, and the trail soon turns into the Beerline, a relatively new biking and walking path that preserves a bit of Milwaukee’s industrial-brewery past. The 3.7-mile stretch of trail follows the old brewery freight line that became known as the Milwaukee Road. 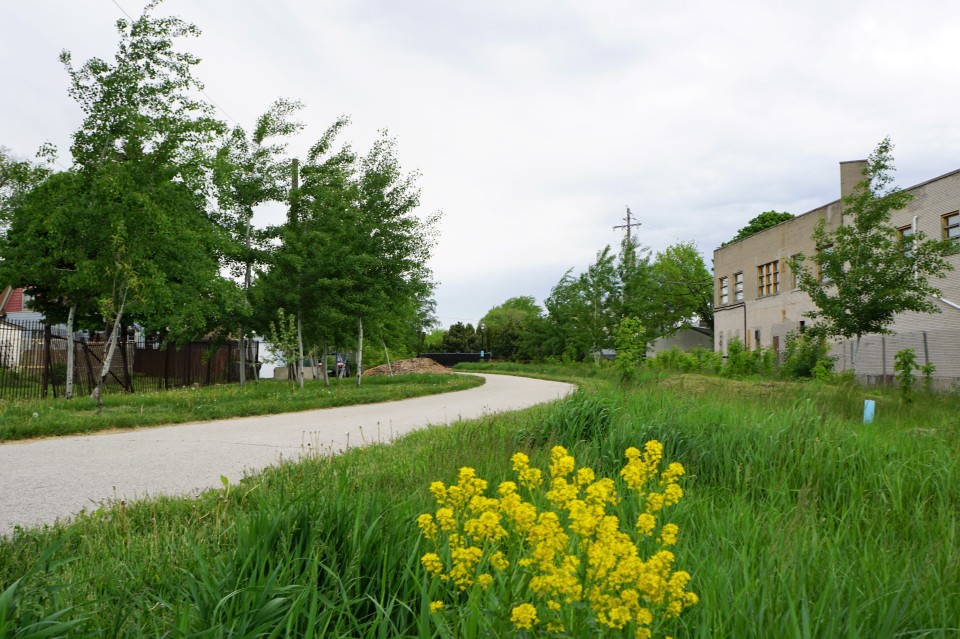 The railroad shut down in the mid-1980s, and the abandoned old rail line was later converted into a multi-use trail. The unique murals and public art along the route make it an interesting and fun trail to walk. 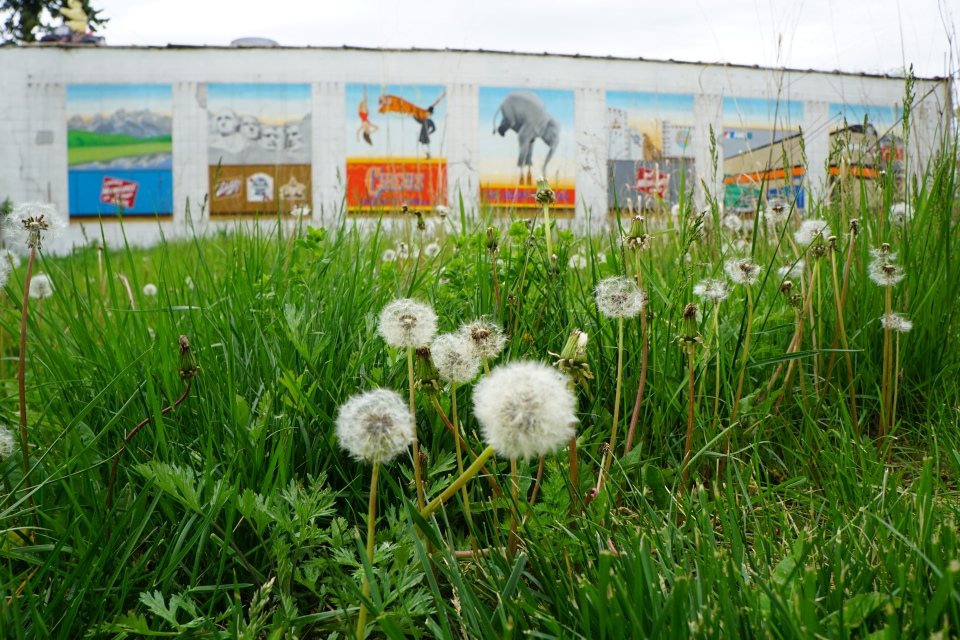 And rest assured, you won’t go thirsty along the Beerline. The trail passes closely by Cafe Corazon, a neighborhood Mexican restaurant that serves tasty, authentic food in a historic building. Many other breweries, bars, and restaurants are also clustered nearby.

A walk through Milwaukee would not be complete without a visit to the the city’s greatest natural feature – Lake Michigan. And dominating the lakefront is the stunning Milwaukee Art Museum. Whether sunny or cloudy, the sight of the graceful, white-winged building is breath-taking. 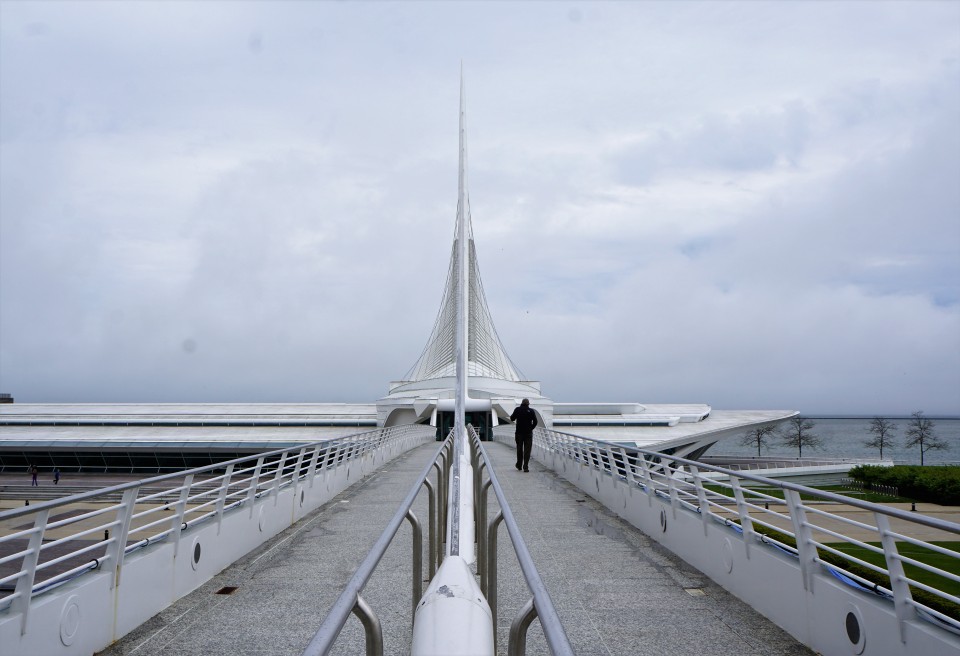 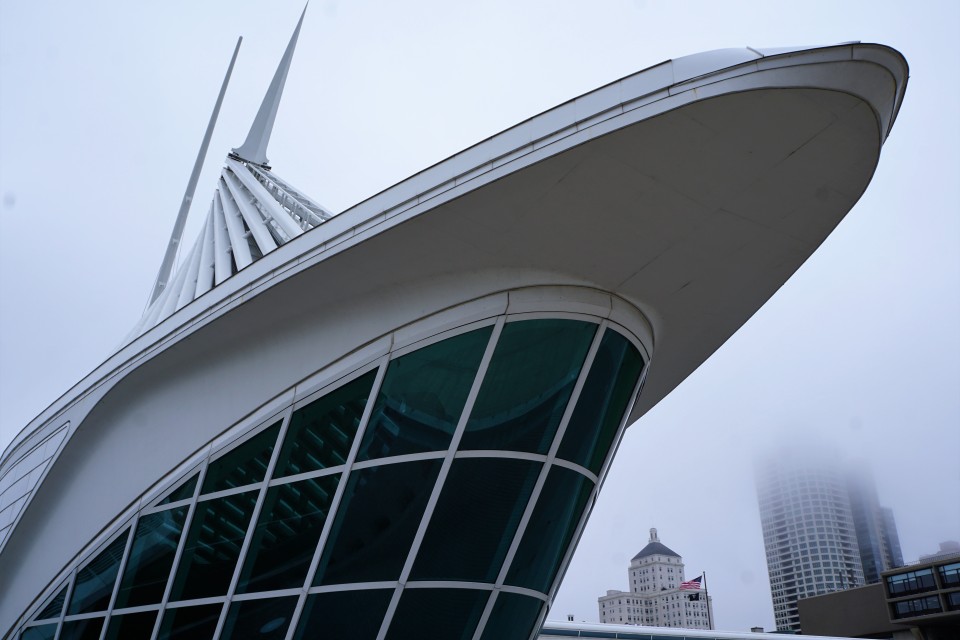 Don’t stop with the museum, though. I also recommend a walk along the Oak Leaf Trail on the waterfront for great views of the harbor and the city skyline.

Although Milwaukee is a large city of nearly 600,000 people, its center is compact, and it’s a great place for a stroll. Oh yes, and a brew!

Getting there is surprisingly easy, as is getting around once you’re there. I didn’t rent a car, and I was able to see everything I set out to see in a few days. Milwaukee’s main airport, General Mitchell International Airport, is served by most major U.S. airlines (American, Delta, Southwest, Frontier, Alaska, and United). The GO Riteway Shuttle booth at the airport offers quick rides to many downtown hotels, while taxi companies and Uber and Lyft also offer service to and from the airport, as well as around the city. To guide foot traffic downtown, dozens of informative street signs point the way.

← My Mother’s Day/road trip/Tom Petty connection
A Hike and a Bite: Durango, Colorado →