Before my road trip to Hatch, New Mexico, in early October, I wasn’t even aware that “Hatch-heads” existed. Now, after spending a few days exploring the area, I have to admit that I’ve joined the ranks of those somewhat obsessed fans of the chile peppers native to the Hatch Valley.

Admittedly, I’ve always loved green chiles. I can never resist the rich fragrance of roasting chiles at my local farmers’ market. And I always have a supply of canned diced chiles in my cupboard, or whole-roasted chiles in my freezer. I use them in everything from tortilla soup to refried beans to chile rellenos.

But I had never before experienced the chile bonanza that is harvest time in Hatch. From the minute you leave Interstate 25 about 185 miles south of Albuquerque (exit 41 onto New Mexico Route 543) and cross the tree-lined Rio Grande, you are transported to a virtual chile wonderland.

Shop after shop in the small farming village of Hatch features bright-colored signs and rows upon rows of ropes bursting with drying red chiles.

As I drove down Hatch’s main street, the Grajeda Farms Hatch Chile Market caught my attention, with its six-foot-long strings of glossy red chiles. I spent more than an hour wandering through the outdoor curtains of pepper strings and exploring the indoor market with its shelves of chile powder and Mexican-style pottery.

Permeating everything was the rich scent of chile peppers. 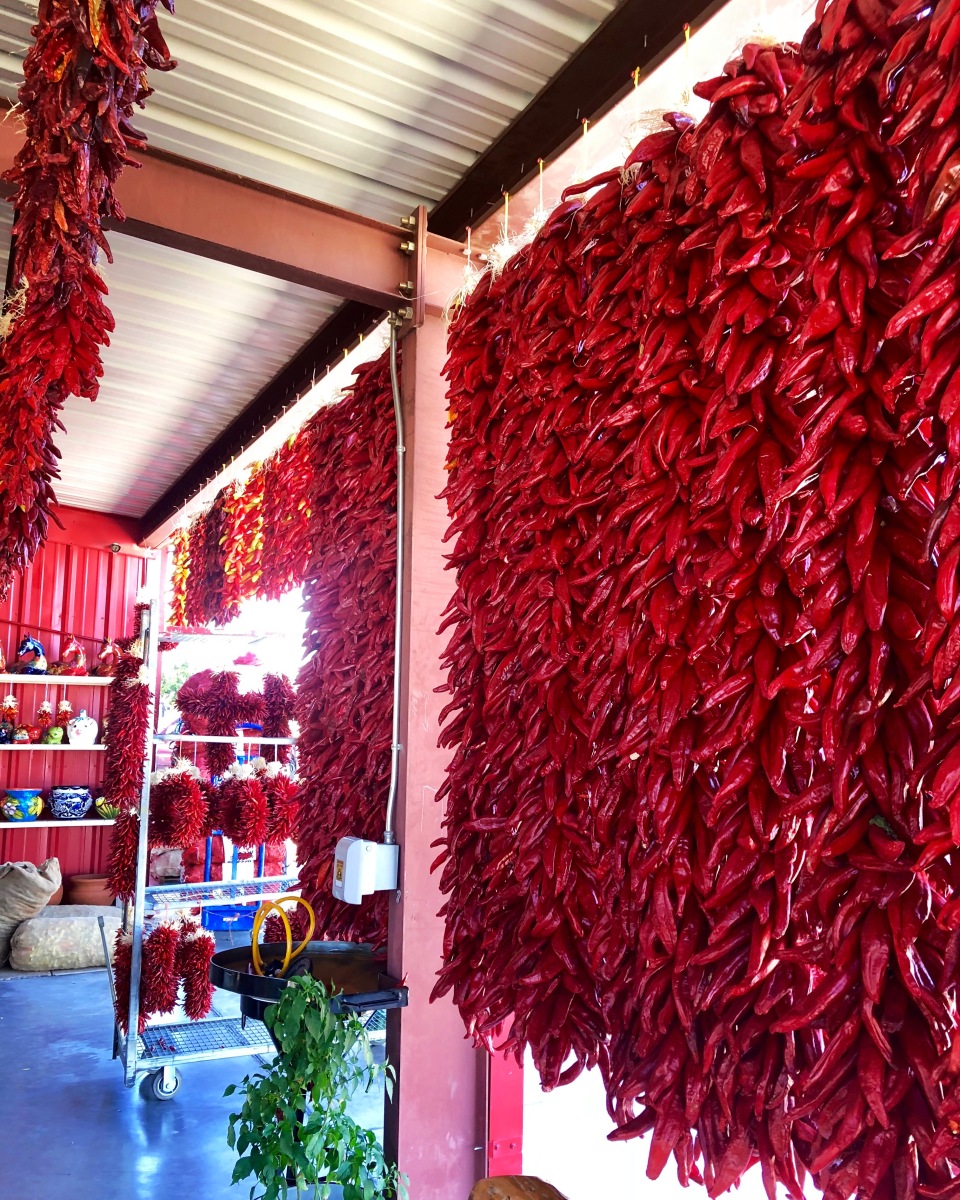 The strings of dried red chiles at the Grajeda Farms Hatch Chile Market come in lengths of anywhere from two feet to six feet. These six-foot-long strings make an impressive curtain and are eye-catching from Hatch’s main street. 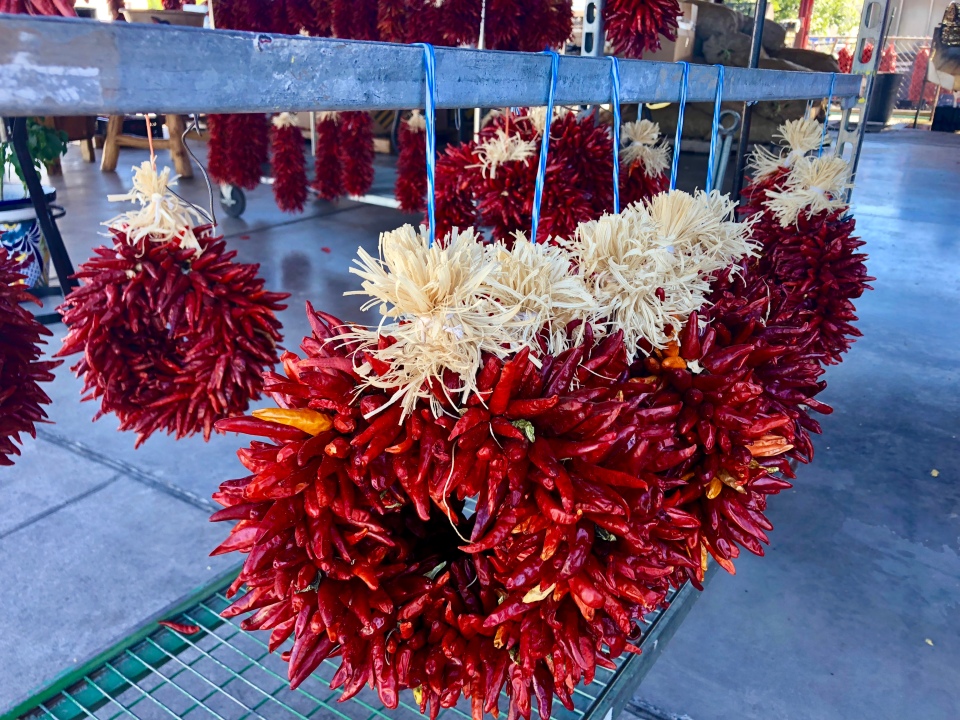 Pretty red wreaths in a variety of sizes, and small bunches of chiles add to the variety of dried chiles available at Grajeda Farms in Hatch, New Mexico.

I decided immediately that I wanted to buy some freshly roasted chiles to take back with me to my home in Arizona. By the time I arrived at the market, though, it was mid-afternoon, and that day’s roasting had ended. I noticed that the bags of already roasted chiles were all marked with a big “H” for hot. When I mentioned to Sergio, the proprietor, that I was interested in chiles more in the medium-heat range, he offered to fire up the roaster and prepare some made-to-order chiles. “It will only take 10 minutes,” he assured me. I happily agreed.

I know from experience that chile heat is a relative thing; New Mexico chiles tend to be a bit hotter than those in Arizona. So, I had to think for a minute when Sergio asked if I wanted medium-hot or medium mild. In the end, I opted for medium-hot, and he quickly emptied a gunnysack full of chiles into the propane-fired roaster and started the roasting process. 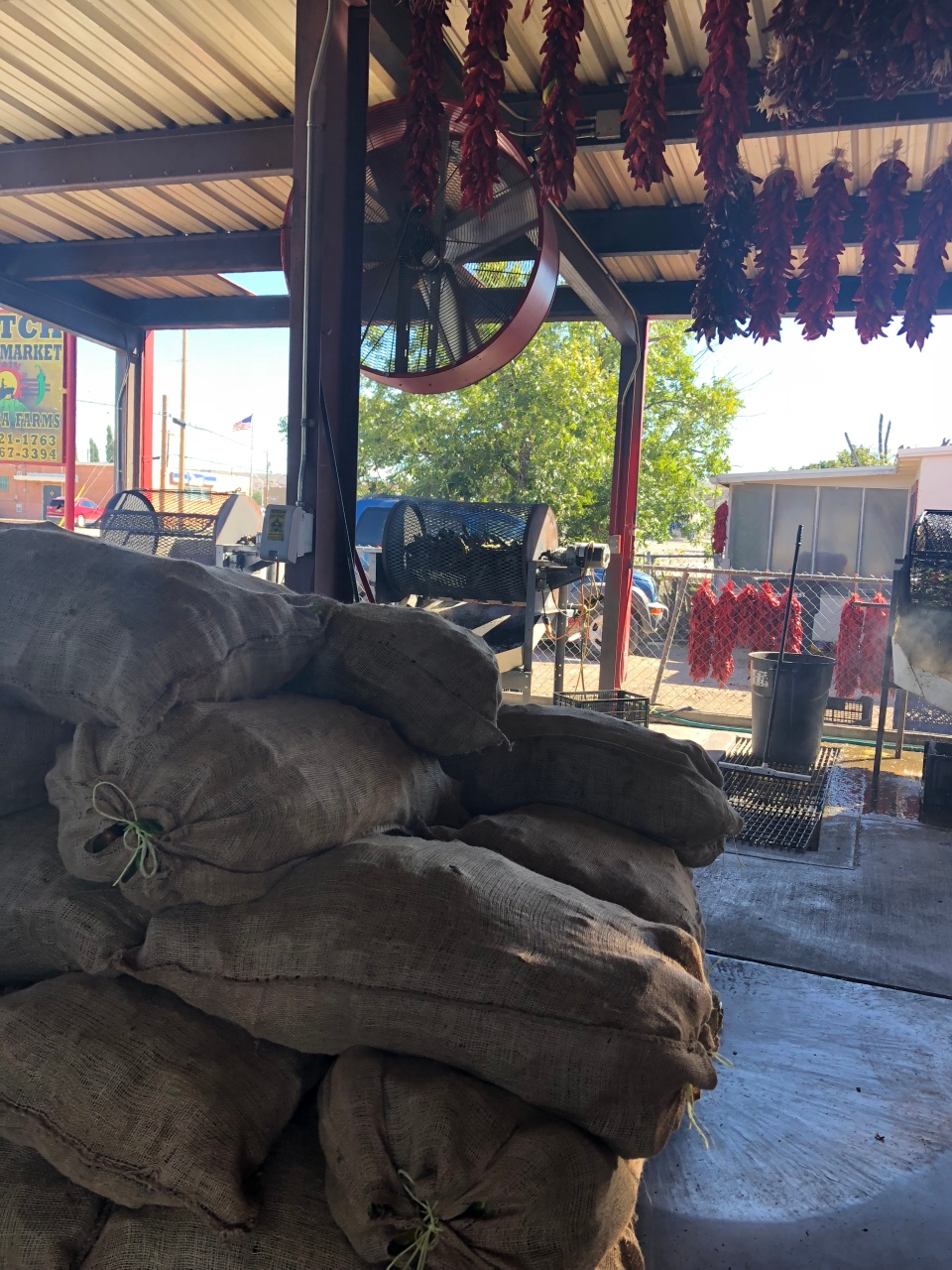 While I waited, I chatted with a young local man who was also looking for some fresh-roasted chiles. When he learned I was from Arizona, where chiles are also grown, he said, “But there’s nothing like New Mexico chiles.” I couldn’t argue with that.

After leaving Grajeda Farms, I continued down Hatch’s main street, and turned onto Highway 26, where I found even more pepper-focused shops, including the Chile Fanatic. The shop’s colorful southwestern metal art and multi-colored chile strings drew me in. 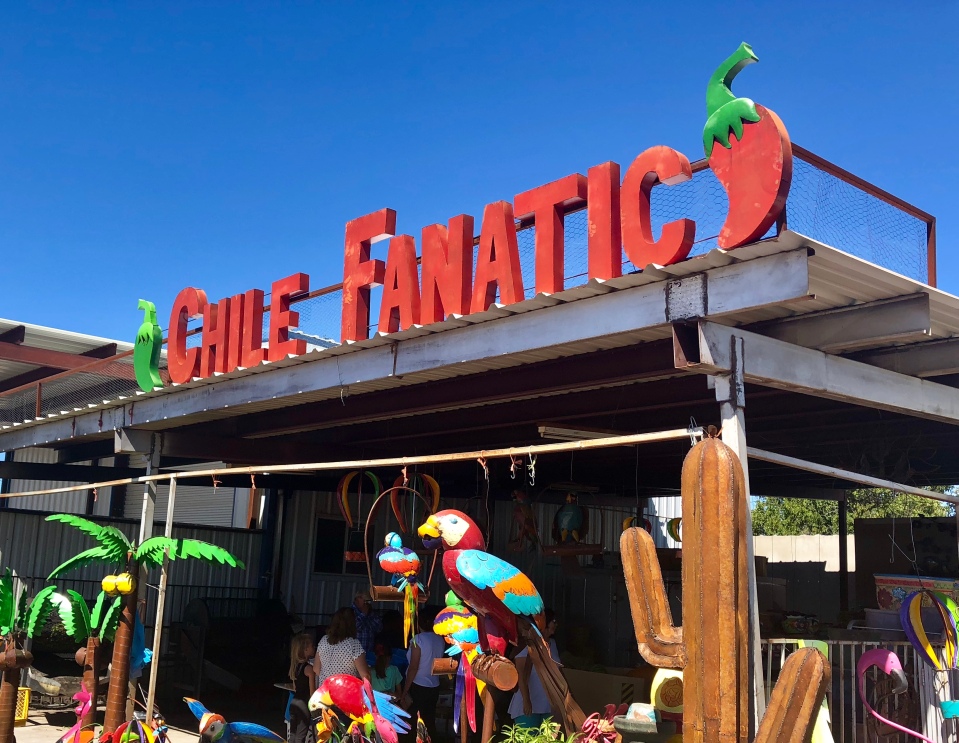 I was told that I had arrived in Hatch at the end of this year’s chile harvest, and signs of the season could be seen everywhere – in the burlap bags, the stacks of loose peppers, and the abundance of local customers.

Another thing I learned from talking with the locals was that everyone who visits Hatch eventually checks out the town’s famous eatery, Sparky’s Burgers & BBQ. I got there at 11 a.m., which was a good thing, because by about noon that Friday, a long line had already formed outside the restaurant’s door.

The interior of Sparky’s is cute and funky, but I chose to sit outside, where misters were on hand to keep me cool. Instead of a burger, I opted for the grilled chicken sandwich with green chiles, along with a side of green-chile sweet corn.

The food was piping hot and delicious, but in my mind the real star of the meal was the fresh-squeezed lemonade with green chiles. Who would have guessed that lemonade and chiles would pair so well? The spicy-tart drink was just the thing on that warm, sunny New Mexico day.

‘Chile Capital of the World’

Although I had long been aware of Hatch chiles, I had no idea of the Hatch Valley’s rich pepper history. It turns out that green chiles have been the region’s premier crop for centuries – first grown by the Pueblo Native Americans. Since the late 1800s, chiles have been developed at New Mexico State University (then known as New Mexico College of Agriculture and Mechanic Arts).

I learned that the Hatch Valley region is perfectly suited for chiles because of its altitude, climate, and soil. Peppers, which require a long growing season, take well to southern New Mexico, where seeds can be planted directly into the warm soil.

Little wonder that Hatch proudly touts its nickname, “Chile Capital of the World.”

In nearby Las Cruces, where I stayed, chiles are a main attraction of the “Walk of Flame” Green Chile Trail, and a number of restaurants feature chili-focused menus. For a taste of the farm origin of the chili peppers, Hatch is a fun day trip that is just a half-hour or so away.

Posted on October 7, 2018 by nearandfaraz